Half Watercraft, Half ATV, All Fun
Written By:
John Arens 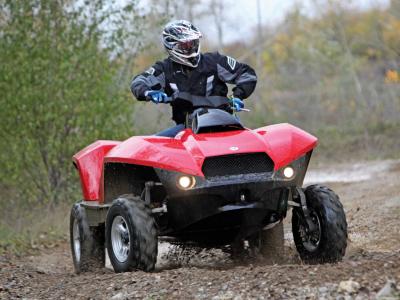 Detroit’s Downtown Athletic Club seems like an unlikely location for a new model introduction.  It is more of a combination art museum and monument to captains of industry, as member plaques ring out names such as Ford, Dodge, Chrysler, and Briggs.  It’s easy to get the feeling that without a major factory with your name on it, you don’t get in.  The Detroit Athletic Club is about as far from a trail as you can get, but what we had come to see was unlike anything on the trail anyway.  Parked under an awning in front of the posh club, we met the half ATV, half personal watercraft Quadski and its inventor, Alan Gibbs.  Both appeared to be a little out of place and looking for action.

Quadski inventor Alan Gibbs is an uncommon man.  Born in New Zealand, early on Gibbs developed a taste for adventure and entrepreneurship in ample quantities.  Three years of studying engineering in college expanded his mechanical abilities, but a switch to economics opened the door of possibility.  Gibbs returned to New Zealand to work for the Prime Minister but mechanical dreams called again and he left government to build New Zealand’s first car, the Anziel Nova.   Later he abandoned the project to work as a merchant banker in Sydney.  While in Sydney, he began to craft deals that would give him control of automobile, trucking, and other business interests.  When the wireless telecomm industry was on the brink of geometric expansion, Gibbs recognized the potential and positioned himself to not only ride the wave, but to steer the ship, eventually securing the rights to the Telecom Co. of New Zealand in a 4.25 billion dollar deal.  He then developed SKY TV, New Zealand’s first pay-for-service television company.  The desire to build mechanical devices was never far from his thoughts, though, and neither was the need. 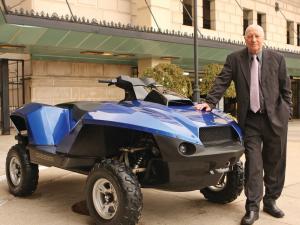 “I would anchor my boat in the harbor behind my farm, and thanks to the tides, it would be ½ mile out in the water by the time I reached the car,” Gibbs told me.  “I needed something I could use on either water or land if I wanted to get on or off it.” Thinking there was no better place on the planet to build a vehicle than Detroit, Michigan, Gibbs moved to Detroit and immediately began knocking on engineering firm doors.  Several high speed, amphibious concept vehicles were introduced ranging from passenger vehicles to heavy military transports, and today the Quadski is built at their plant north of Detroit in Auburn Hills.  The Quadski is the result of years of research, more than 300 patents, and an investment of more than 200 million dollars.

Probing the mechanical depths of the Quadski is a little difficult.  Unlike every other ATV, it has a hull and is sealed up, yet four wheels protrude from its sides along with a wheel retraction mechanism that reminds us very much of an aircraft landing gear both in design and quality.  It doesn’t take you long to discover this is one well thought out machine; the workmanship is excellent.  All the A-arms and wheel uprights are forged aluminum with machined surfaces, and one trick Quadski engineers did was commonize parts.  Several of the front suspension pieces are a mirror image of the opposite side and are interchangeable.  Unlike normal ATVs, the Quadski requires much higher corrosion protection, especially for salt water operation, and all fasteners are stainless steel, while all other parts get an excellent, corrosion protection coating.  At the rear, rather than a muffler there is an enormous, high-efficiency jet pump designed by Gibbs just for this model.  All bodywork on the Quadski is fiberglass and seams fit together tightly with a sweeping, smooth flow between panels that leaves no sharp edges or protrusions to catch on anything. 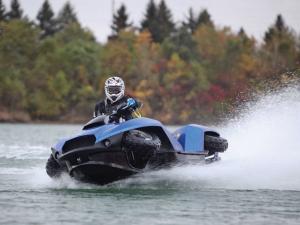 Deep inside the hull lies by far the most powerful engine ever put in an ATV or Side x Side.  The Quadski gets its power from a 4-cylinder 1300cc, 16 valve, DOHC, EFI equipped BMW engine.  The K1300 engine is the same motor BMW uses in its Motorrad motorcycle and it’s rated at a whopping 175 horsepower.  That kind of power could get a lot of riders in trouble fast so the Gibbs team actually limited the Quadski to 80hp on land, but in water all limits are removed.  Top speed is 45mph whether on land or lake.  Mated to the engine is BMW’s constant-mesh, six speed electronic transmission.

Propulsion on a wheeled vehicle and a boat are vastly different, and to get around the problem of how to serve both needs, Gibbs’ engineers use an electronic transmission for the ATV while the pump gets its own drive system.  In effect, the pump is always turning, even on land, but when the wheels are retracted, they are disabled.  The transmission is also unique in that it downshifts automatically to stay at the correct RPM range on land, but upshifts are smoothly made with a thumb button on the left handlebar much like Honda’s electric shift ATVs.  The Quadski also has reverse on water and land, but on dirt it is actually an electro-mechanical system rather than transmission driven.  Slip the Quadski into reverse and it will steadily move backwards until the system reaches a given temperature and then it takes a little break until it is back within optimum operating range.  Don’t worry; it goes quite a ways before you’ll notice it.  We backed it down the entire trail as a test and had no problems. 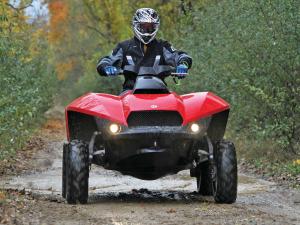 Controls on the Quadski are much like other ATVs or watercraft.  The handlebar bend is aggressive yet comfortable, all controls are within reach and easy to understand, and the center mounted digital display is a work of digital art.  It’s BY FAR the best digital display in the sport.  Rather than just utilize an existing display from another manufacturer, Gibbs designed their own and it shows you everything you need to know with icons indicating water or wheeled operation.  We like it!  On the right handlebar is a thumb throttle very much like those on other watercraft and all snowmobiles, and just ahead of the seat is a button for retracting the wheels.

We love riding just about anything, but mid-October in Michigan is hardly premium watercraft season, especially when it’s only 40 degrees.  Climbing up onto the Quadski while it’s on land is a little like boarding a tall watercraft, and once aboard it feels big and roomy.  We slipped the kill switch lanyard required for personal watercraft operation over our left wrist and flipped the key on.  A stab at the starter button got the big BMW humming smoothly and with a little throttle, we headed for the trails. 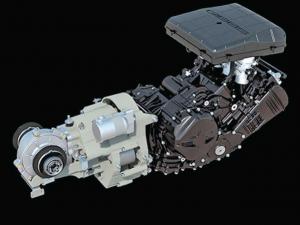 We love the throaty, powerful note from the BMW motor, and the higher you rev it, the better it sounds.  Shifting up through the gears was easy, even with the power on and the digital display shows what gear you’re in.  We like the Gibbs electronic thumb shift system better than Honda’s EPS system actually.  The Gibbs thumb button is placed much better ergonomically than the Honda and the motion was very natural; you didn’t have to think about it.  With the power coming from the BMW motor, it doesn’t take long to find the highest gear, and in open sections or two track roads, we were flying down the trails.  Downshifts are automatically taken care of by the transmission, and it was fun to shoot from corner to corner, letting the engine howl.  Despite its robust size, it was possible to get the Quadski to slide, but we were careful not to catch any ruts that could roll a tire off the bead, or worse, cause us to high side the entire machine.  That would be ugly with fiberglass bodywork.  The Quadski isn’t really made for winding through tight trees, but for most trail action, it will get the job done.  It loves to run in wide open spaces, however, and at top speed (45mph) it feels very stable with no tendency to wander.  Small whoops and bumps in the trail are handled easily by the suspension, and with 9 inches of ground clearance, you’ll clear most obstacles on the trail.  We were always conscious that it was a hull and not a skid plate under us, although rocks from the trail are easily deflected off the composite hull.  We wouldn’t recommend serious rock crawling on the Quadski, though.  Braking was straight, smooth and consistent at any speed with the disc brakes bringing everything to a quick stop.  On the trail, it handled very similar to a big-bore utility ATV with a longer wheelbase. 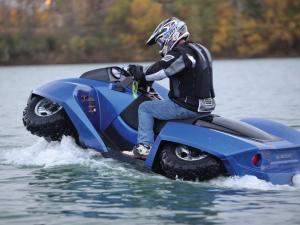 Transforming the Quadski into its watercraft configuration is super easy.  Roll into the water on the wheels and when deep enough, press the button on the panel between your knees.  A sensor makes a quick check for sufficient water (so you can’t do this on the trail) and if deep enough, a pair of servomotors retract the wheels into their position, all in less than 5 seconds. It’s smooth, fast and easy!  The transmission is now disengaged, the CPU transfers the motor into watercraft mode, and the high performance jet pump stands ready to deliver on the 175hp promise.

With a healthy dose of throttle, the Quadski easily rises out of the water and planes up nicely.  As with on dirt, again you get the feeling this is a large unit, but it’s extremely stable.  We hammered the Quadski across the lake, across our own waves, and we pitched it into turns.  Never once did we feel like we might be separated from the machine.  The Quadski even slides quite well, but it’s also possible to pull very tight turns quickly and predictably.  Again, it is very confidence inspiring.  We really didn’t want to bring it back, but darkness was eminent and the crew on shore was trying to warm themselves and ready to light a beach fire in the freezing temperatures.  We were having fun!

Alan Gibbs doesn’t expect the Quadski to take the place of hardcore ATVs or personal watercraft.  It was never designed to do that.  It was, however, designed to be the fastest amphibian on land or water, and before the Quadski no other amphibian could break 10mph on water.  Topping out at 45mph, the Quadski trounced that mark easily.  At nearly $40,000 for first year models, it’s out of the price range of many, but Gibbs expects that number to drop significantly as production efficiency is realized.  Still, if that number doesn’t bother you, then the Quadski might be just the thing for your lake house or behind your boat.  The Quadski gives you a new freedom no other machine can match in a great looking, well designed package, and it’s just plain fun wherever you take it.