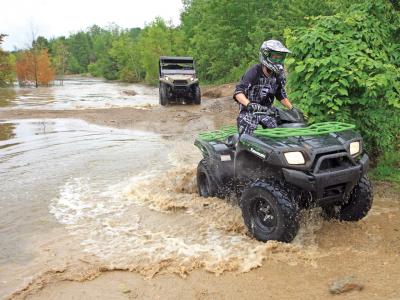 For thousands of years there have been mining operations in North America, and everything from copper to coal to turquoise and tar was hewn from the ground and either made into items of higher value or used in its raw form.  Regardless of the material or the geography, mining always has been and still is a tough business.  As long as we keep using electricity, we’ll need mines.  Every mine comes with two identical problems, however: the material being extracted is limited, and when played out you’ve got a big hole in the ground, especially with surface mines.  A century ago this wasn’t really much of a concern, but today we’ve come to realize it’s important to take care of the land and of the people who still inhabit the area.  Can’t we all just get along?

Old William Penn’s Pennsylvania was one of the original colonies but also had the lucky circumstance of being one of the new nation’s best sources of raw materials from timber to oil and even coal!  The coal was such a high grade it came with its own name – Anthracite – which when burned produced more energy pound for pound than just about anything else.  As a result, it was highly sought after and countless test mines both above and below ground sprung up to harvest it.  Mines were opened, the material extracted, and when it was depleted in one area, the mining company and crew simply moved on to the next best location.  Eventually, this left a lot of empty holes and unsightly terrain, but it also was a severe blow to local economies.  We like to think there are always opportunities, however, and as it turns out, former mining properties have immense recreational possibilities. 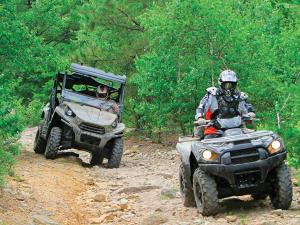 The Commonwealth of Pennsylvania walks a fine line between economic viability and long term, conscientious environmental management of natural resources.  Protection and management of the environment is something everyone is interested in, but areas must be managed without leaving the local citizens and economic viability out of the equation.  Recently we were invited to preview an enormous new ride area and witness the successful realization of energy, environmental, economic, and recreational needs for all.

The new Anthracite Outdoor Adventure Area is a planned recreational project on almost 6500 acres in rural Pennsylvania near the town of Shamokin.  Like the Hatfield-McCoy system, Knott County, Kentucky, and various other ride areas around the country, the AOAA is built on property long abandoned by any mining operations but not forgotten by locals.  In fact local residents have been riding, hunting, and discretely using the property for years, but with no management plan in place, that can be a problem as a careless and unconcerned few inevitably misuse the area as well.  As ‘Zep says, the song remains the same and there are a few of those types everywhere.  Just like the coal that was mined here, though, the AOAA is one step away from becoming a diamond. 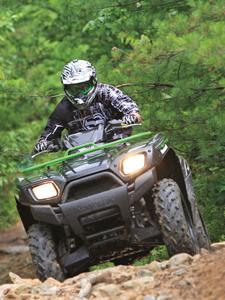 Kathy Jeremiah, the project coordinator for AOAA, says the master plan calls for access not only for ATV & UTV riding but also for hiking, camping, biking, 4x4 & Jeep enthusiasts, and horseback riding.  With a little assistance from mother-nature and enough snow, they’re hoping to make the area available to snowmobile lovers as well!  Creating an outdoor Mecca like AOAA is not done overnight, and not without a lot of work and input from citizens, government officials, and user groups.  It’s been a long process, but with the help of Northumberland County officials, specifically Planning Director Pat Mack, funding from the Department of Conservation of Natural Resources (DCNR), studies from land use professionals, and input from enthusiast groups like the Lehigh Valley ATV Association, the new ride area is closer than ever to becoming reality.  It’s Pat Mack who has really been carrying the ball on this project though in order to benefit the entire region and internet sites are abuzz about a new ride area in the Northeast.

ATV and UTV media outlets were given a sneak peak ride at AOAA last summer when Kawasaki chose to show us the area.  Our old racing buddy and fellow journalist, Lance Schwartz, is a local resident and served as tour guide for the outing, and he knew exactly the type of terrain we were looking for: challenging.  As expected some of the trails were old mining haul roads and those are generally open and passable by most vehicles which make for easy, relaxed riding.  Lance is a skilled tour guide, however, and it didn’t take him long to lead us to trails chock full of ruts, rocks, and hills to climb.  Tight trails through the woods, mud sections, and creek crossings provide an excellent assortment of challenges and will be welcomed by most ATV and Side x Side riders.  In some areas the trail wound up steep hills with severe drop-offs and dramatic views where you could see for miles.  Surprisingly, we even found a huge, sandy area called appropriately “The Sands,” and there was even a hidden lake on the property!  With Lance’s help, there was plenty of adventure and challenges for all, and he and Kathy claimed that about 200 miles of trails have already been created, with more to come. 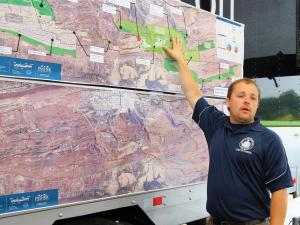 On our summer ride, the area was heavily covered with the green canopy of the forest, but luckily we came back in the fall!  On our fall outing to AOAA, we were invited by Dave Crowl, and this time our roving crew included Moxie Karasek and Rick Engle with our trusty Polaris Ranger 500.  Along with Lance, Dave has been instrumental in working for the opening of AOAA and he would serve as our fall tour guide.  Riding through the multi-hued, colorful leaves of fall showed a whole new side to Anthracite, and experiencing the endless views and fireworks-like color display from atop any of the high lookout points is nothing short of incredible.  AOAA has more to discover than just great views, though.  It has some very unique geological formations, including an enormous outcropping of exposed shale called the “Whaleback”.  The Whaleback looks exactly like a half-submerged whale, but apparently this type of formation is so unique it’s been studied by geologists and universities from all over the country.  Besides the natural geology, there are huge piles left behind from mining operations, and even some old equipment now resting silently, since the day it was retired from service, slowly being overtaken by nature.  Winter, spring, summer or fall, AOAA has something to discover for all. 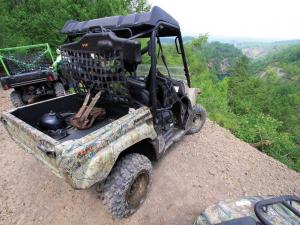 It takes a tremendous amount of work to create a new recreational area like the AOAA.  It also takes dedicated individuals to do much of the ground work, State, County and local officials with the foresight and reason to address the concerns of all, and land management experts and agencies to craft a workable plan.  We congratulate all those involved with the AOAA for those abilities and what you have created so far.  When fully open there will be an entrance fee used for park management and maintenance.  That’s to be expected with any self-sustaining park, and we’re sure most riders will definitely understand the value in it.  The basic elements for success are already in place and they’ve got excellent local hotels, restaurants, and just about anything else a dirt-loving visitor could want.  The same hills that held economic prosperity from natural resources now present excellent recreational opportunities whether on horseback, on foot, or on an ATV.  We can’t wait to come back again!

For more info. check out: