Bigger and Better Than Ever
Written By:
John Arens 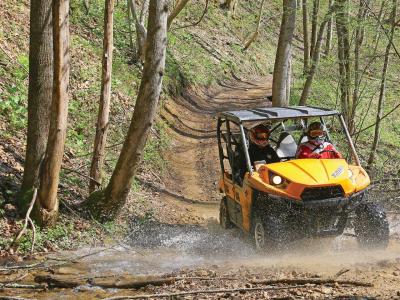 One of our favorite places to ride just keeps getting better!  The Hatfield-McCoy trail system is getting ready for the official opening of a new major section called the Ivy Branch Trail.  That makes eight major trail sections in the Hatfield-McCoy system, with more to come.

The new IVY BRANCH trail will be located between McCorkle and Woodville in eastern Kanawha County.  Most riders would know it as being “adjacent to the Little Coal River trail system on US 119” as described by Jeff Lusk, Director of the Hatfield-McCoy system.  However you look at it, the new trail means increased economic viability for the region, and excellent opportunities for off-road recreation in a very welcoming community.   When determining a trail head location for any new trail, the Hatfield-McCoy development authority wisely seeks input of local communities and looks for locations that have not only enough space but also existing support and the potential for new development to create a viable system.  “We want to see cabins, campgrounds and even hotels developed near our sites,” Lusk says.  The new Ivy Branch trail will offer one feature no other branch can claim though. 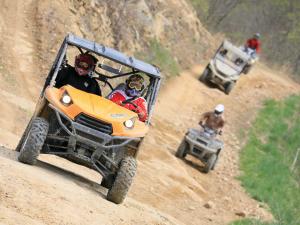 The Hatfield-McCoy system has been a favorite for ATV, UTV, and dirt bike riders since its inception, but traditional 4x4 and Jeep owners had to stand by the trailside and watch us have all the fun.  That’s about to change; the Ivy Branch trail will be the first branch of the Hatfield-McCoy system open to FULL SIZE 4X4 VEHICLES!  It’s not that there was any conspiracy against the guys and gals with full cabs, but trails to accommodate them have significantly different requirements than for ATVs or bikes, and the directors of Hatfield-McCoy didn’t want to deliver a system that was less than they deserved or expected.  Now they can experience part of the great Hatfield-McCoy system too.  Total length of the Ivy Branch trail is approximately 75 miles, with special trails and rock crawling areas just for the full-sized guys.  According to Hatfield-McCoy Marketing Director Mike Pinkerton, "Plans to construct a 4x4 riding area have been in the works since the inception of the trail system and we're very excited to be able to finally offer a trail to the full-size 4x4 market."  The Ivy Branch trail will officially open on July 15th, and if it’s anything like the rest of the system, we can’t wait to try it out.   Other branches of the ever expanding Hatfield-McCoy system include: 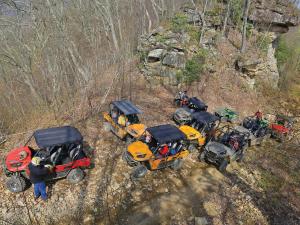 With the addition of the new IVY BRANCH trail, there will be over 700 miles already open to off-road fun.  Incredibly, even before the new branch is officially open, there are plans in the works for even more trail miles, and connecting sections between existing trails.  Engineers are already at work designing a bridge to cross a river, and when constructed, the Little Coal system and the Ivy Branch will be linked.  The master plan for the system calls for over 2000 miles of interconnected trails through Southern West Virginia, allowing riders to ride right from hotels and to local restaurants, fuel stops, and other amenities.  There are trails for riders of every skill level, but regardless of whether you are a beginner or a lifelong rider, you can find plenty of challenges, great scenery, and friendly people.  This system just keeps getting better! 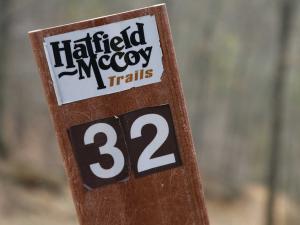 With a highly organized trail system and excellent state and local support, it was only natural to throw a yearly party celebrating the system, and we’re all invited!  Hatfield-McCoy National TrailFest is scheduled for October 10-14 and is centered in Gilbert, WV, but events will be scattered across the system and throughout the county.  The ROCKHOUSE trail is the host system, and there will be plenty of entertainment, both to watch and participate in.  Mike Pinkerton and his awesome crew promise it will be a festival for the whole family, with something for everyone and great riding for all.

Scheduled activities include: a poker run, a costume parade, auctions, live music and a D.J., dirt bike stunt shows, drag strips, mud pits, a kids’ mini-motocross track, fireworks, factory demo rides of new models, and perhaps most important of all, plenty of activities for kids.  Lodging will definitely sell out early so make your plans soon, and plenty of camping is available as well.  Most TrailFest packages also include catered meals, t-shirts, and raffles for over $2000 in cash and prizes.  For detailed information including lodging, visit www.NationalTrailFest.com and www.TrailsHeaven.com.  You don’t want to miss it!