Off-Road Vehicle of the Year 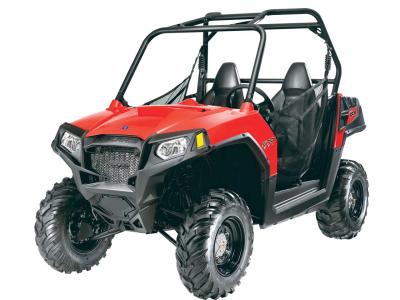 In baseball terms it’s called “small ball.” It means playing for the base hit and excelling at the basics rather than swinging for the fences. With their new RZR 570, Polaris is playing the off-road version of small ball, and they’ve got a new all-star.

The new RZR 570 looks very much like the RZR 800 and chassis dimensions and specifications are nearly identical. Hop into the new RZR 570 and the control layout, ergonomics, and durable bodywork are all very familiar, although we do miss the dash mounted glove box. Thankfully, there is a small storage area under the front hood, but it’s at the rear of the RZR 570 chassis where the major differences can be found. An all-new 567cc, DOHC, single cylinder engine fed by electronic fuel injection is mated to a modular transmission, and in our experience the new engine barely sucks any fuel. Polaris calls the new engines the “ProStar” series and everything about them from the cases to the gears have been designed for the loads of a Side x Side. Both the CVT air intake and a flat, automotive style pleated filter are located high in the chassis to help them breathe clean air and avoid sucking in water, and we are especially happy to find the oil filter and dip stick are easy to reach. Once again, it’s an example of getting the basics down perfectly.

We didn’t know what to expect out of a 570cc engine in a full sized Side x Side but performance is outstanding. The new RZR 570 can run down the trails with an 800, skip through the whoops, and dart between the trees. It’s an absolute blast! Think of the $9,999 Polaris RZR 570 as the rookie all position player who can run, hit, and throw and you’ll get the idea. Ironically, in playing “small ball” with the new RZR 570, Polaris has hit a home run. 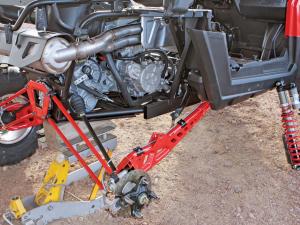