The return of Polaris Camp RZR, the brands festival of all things that roll on sand, is certainly worth celebrating.  What made it even better is that we would be riding the top-of-the-line 2023 RZR Pro R and RZR Turbo R in their natural environment.  They’re two of the best high performance UTVs of 2023 with enough power to make even the most powerful sand car jealous, the suspension of a cheetah, and top speed is somewhere between ridiculous and this would worry ones next of kin.  When the photographer starts getting a nervous twitch about what you’ve been doing but still can’t resist the shot, you know you’re hitting it just about right.  That’s what the RZR Pro R and Turbo R are capable of at any time.  After our latest Polaris adventure he’s probably a new chain smoker. 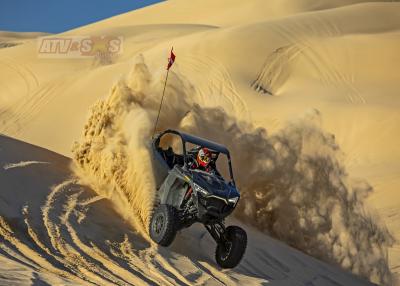 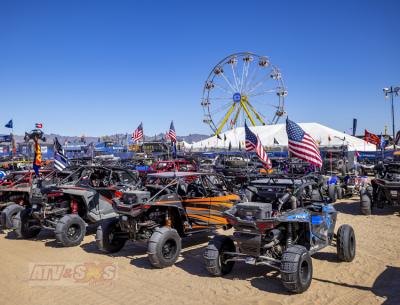 OFF TO CAMP (RZR)

Part carnival, part Mardi-Gras, and part Burning man, the desert fest for all things off-road in the California dunes is known as Camp RZR, and it’s a sight to behold.  Between the Chocolate mountains to the North and Mexico to the south lies a 60 miles expanse of dunes and desert affectionately known as Glamis.  On any given weekend riders on Can-Ams, Kawasakis, Yamahas, and every other off-road vehicle with at least 2 wheels prowl the sand, but for Polaris Camp RZR a small city pops up and 100,000 of your new neighbors take up residence.  And they’re ready for a block party like no other!

Camp RZR’s main display area is reminiscent of an old-fashioned desert bazaar, but with a modern-day feel.  There are rows of customized vehicles on display, vendor tents for everything from tacos to tires, and Polaris manufacturing partners there to meet the customers, answer questions, and offer technical support.  Polaris really goes all-out with their support as well, setting up maintenance tents where owners can pull any of their rides in for absolutely free fixes.  Need a belt, axle, new tie rod, etc.?  They’ll get you back rolling, no questions asked, and it’s all free.  About the only thing they likely won’t be able to fix is a major engine rebuild due to parts and time required, but it’s a fantastic customer support statement.  Thank you, Polaris!

Camp RZR is also a family affair with activities and demo rides for both kids and adults.  A giant ferris wheel can’t be missed and the view from the top is spectacular.  Nighttime activities include free concerts from Pennywise and Face to Face, and they play on a huge stage that folds out of a truck in a manner that would make any Transformer envious.  No doubt whoever built this was a master of origami.  At the end of it all, an impressive firework display caps off the night.  The festivities and sights of Camp RZR are a great time, but the real fun begins as you slip into the seat of the Pro R and Turbo R. 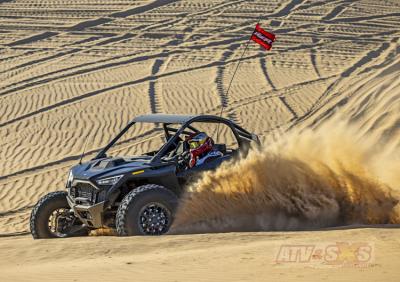 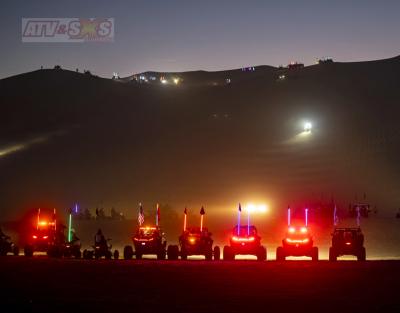 Both the RZR Pro R and the RZR Turbo R share a similar chassis, interior, and bodywork.  The major differences are the engine, suspension adjustability, and extra features of the Pro R.  Both are absolutely top of their class and will easily blow well past highway speeds while delivering a ride like no other.  Here’s the short list of how they compare. 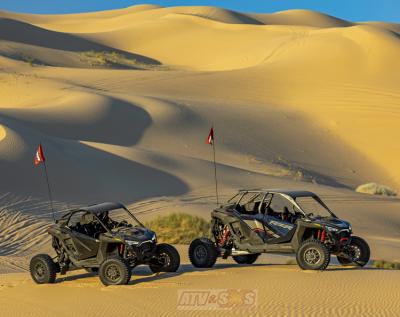 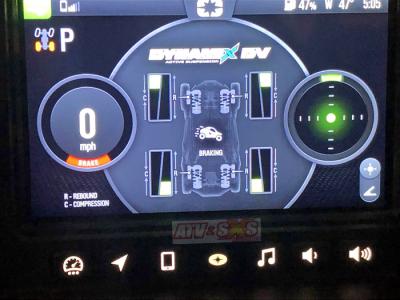 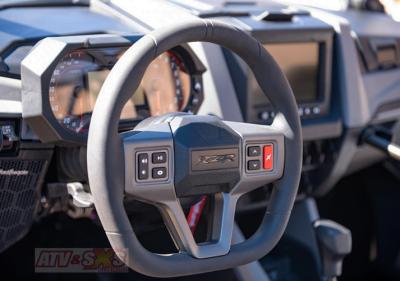 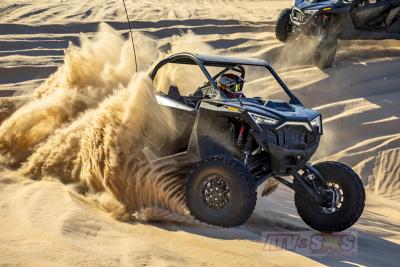 Glamis is a perfect place to test the limits of the 2023 Polaris RZR Pro R and RZR Turbo R.  And if you can hold your foot to the floor long enough to do that, congrats!  These are two Side x Sides that are really testing you!  From any angle there is no doubt about what these two machines are made for.  Body styling can best be described as unapologetically in your face.  It’s the equivalent of off-road s@#t talking.  The thing is, the Pro R and Turbo R can back it up.  Although the two share a common look, closer inspection shows a few panels on the RZR Pro R that hide ducting to the engine and CVT system for increased airflow and better cooling.  Massive, long shocks, boxed suspension members, and 32” Maxxis Rampage Fury tires complete the image.  Inside the cab area is equally all business.

Polaris gave the RZR Pro R and Turbo R premium seats, but just as importantly, racing style harnesses.  They’re not just for looks; they’re an an absolute necessity.  The Turbo R gets a 4-point shoulder and lap harness while the Pro R comes with a 6-point harness for maximum protection.  And with the performance these machines are capable of we wouldn’t ride with anything less.  All controls are clearly labeled, a multi-function gauge is just above the tilting steering column, and thumb buttons on the steering wheel control many functions.  In the center of the dash is a larger digital display with even more info and the Ride Command system. 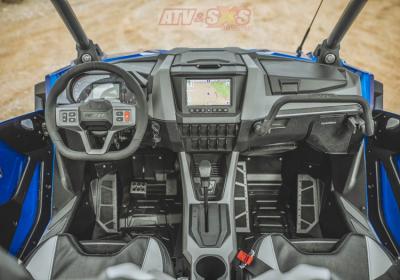 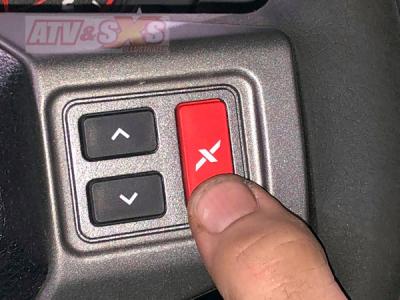 We do mean launch.  We’ve never been shot from a cannon, but it’s probably slightly less exciting than dropping the hammer on the Pro R and Turbo R.  The Pro R engine is basically a version of the 4-cylinder Slingshot engine tuned for off-road, and with a dry sump to guarantee the engine always has oil.  The reason is, dune machines need to climb at steep angles such as the 400-foot sand mountain known as China Wall, and a traditional oil pan would starve the engine of oil.  One thing we were concerned about with this level of horsepower was how the clutch and belt would handle it.  These are not lightweight machines and it’s asking an awful lot of a belt to transfer that much power to the ground, especially on sand.  What we found:  Not a hint of belt slip during our entire dune weekend.  Polaris really got the clutch and belt dialed in on these units.

We headed out across the dunes with the incredible Dynamix DV suspension system set for Baja, (the stiffest setting), which we assumed would be perfect for the deep whoop sections of Glamis.  In this setting it ate whoops like a trophy truck.  What we didn’t care for was the extra chatter caused by crossing other vehicle tracks.  On a busy weekend there are vehicle tracks in every direction, and they tend to create a lot of chatter that a stiff suspension feeds back into the vehicle.  We found a solution though.  We dropped the Dynamix DV suspension into its Comfort setting and all chatter disappeared.  And we made the switch on the fly without taking our hands off the steering wheel.  It’s a fantastic feature and we spent the majority of the weekend driving in the Comfort setting!  Thankfully, Polaris built in a feature for when we did encounter a potentially big hit as well.  The steering wheel is equipped with a red thumb button that quickly pops the suspension to its stiffest setting for what seemed like 5 to 8 seconds. Our group began calling it, “Oh S@#t!” mode.  That’s not an inaccurate description, and it really helps with big g-outs at the bottom of dunes or unexpected desert washes.  It’s basically the equivalent of hopping out with a screwdriver and cranking the compression up 24 clicks at each shock.  Only this feature is done on the fly, again thanks to the Dynamix DV system.

Long travel suspension often means excessive body roll, but not with this system.  The active suspension has an onboard gyro that senses both the pitch and yaw of the vehicle at 200 times per second, and it fires out a signal to the shock solenoid to open or close the valves to counteract that angle.  The result is almost no body roll, and the car flies without the nose drop so common to most Side x Sides.  As one test rider proclaimed, “It’s F’n sweet!”  He’s right!  While some brands offer a similar shock with adjustability through a dash switch, the Polaris system does it automatically, and on the fly.  You can’t beat it. 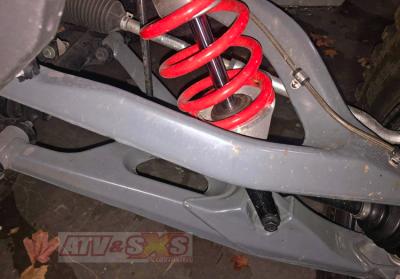 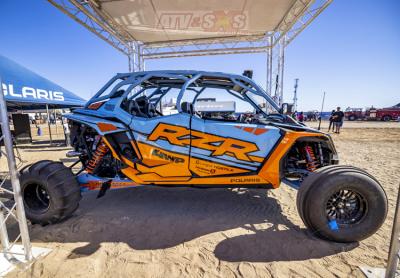 So, what’s the top speed of the 2023 RZR Pro R and Turbo R?  They’re governed to hit 95, and easily cruised through the infamous Glamis sand highway at 90 with not a hint of chassis twitch.  Both machines handle beautifully at speed, and they’re deceivingly fast.  And that’s a bit of a problem.  Let’s face it, we all have some friends who shouldn’t drive anything faster than a shopping cart, much less a 225 hp RZR.  Both of these machines have a way of getting to the next corner in a big hurry.  They’re not vehicles you can become complacent on.  Thankfully the brakes are better than the ones on your car.  They’re top of the line in every way.

For years Polaris has wanted to offer factory installed parts that previously had only been available from the aftermarket.  The 2023 RZR Pro R and Turbo R are the culmination of that idea.  And while the price of $40K sounds crazy for a dirt toy, consider that many start with a $20-$25K machine and then install another $10k to $15k in parts.   Polaris gives you that performance right from the factory, and everything comes with a warranty, while aftermarket parts often void any factory warranty.

The king of the dunes used to be custom built, LS powered sand cars.  The Polaris RZR Pro R and Turbo R feel almost like cheating.  They’ll eat whoops like a $150 to $200K sand car, but for a whole lot less.  And this is where they are best.  Yes, they’re surprisingly nimble and can wind through the trees as we’ve proven with one in the northern woods, but that’s not really showing their true capabilities.  They’re born to run and nothing can catch them. 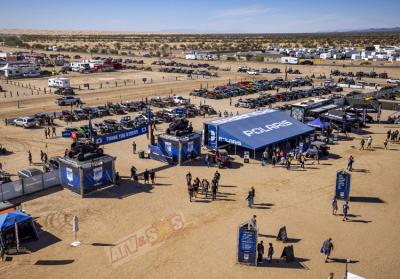 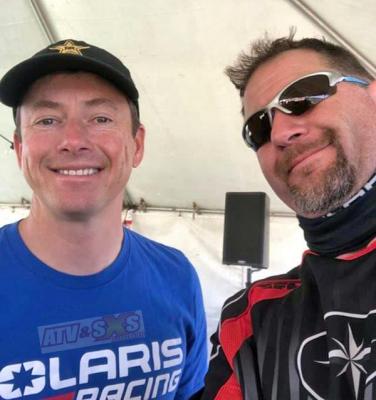 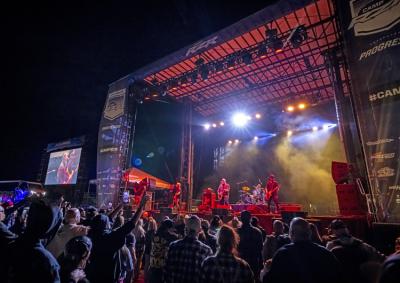