AN ELECTRIC POLARIS RANGER COMING TO A TRAIL NEAR YOU
Written By:
John Arens

From motorcycles to SUVs, every vehicle manufacturer has been experimenting with electric power systems.  In this arena it would seem auto manufacturers like Honda have an enormous leg up, with years and even decades of research and actual electric vehicle production behind them.  Still, it is often small companies with an overabundance of creative ideas that find new solutions to difficult problems.  In the motorcycle world that company is ZERO MOTORCYCLES.  They’ve taken on the challenge of creating an electric motorcycle that you would actually want to ride.  That got the attention of the big-boys, and rather than reinvent the wheel, Polaris opted to form a working relationship with ZERO to create the next generation of electric UTV. 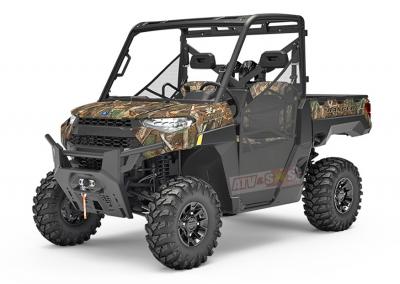 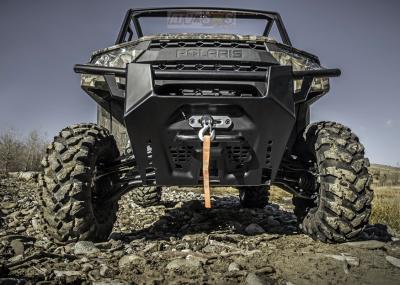 NOT THE FIRST ELECTRIC POLARIS

We say next generation because a decade ago Polaris introduced their first electric side x side, the Ranger EV, the first true electric UTV with serious off-road chops.  Pretty much everything before the EV was a golf cart riding on oversized off-road tires, with a 6 pack-rack in the back.  Suspension was usually very limited and 4wd was only a distant dream.  That left an opportunity, and as usual, Polaris was there to answer it.

The Polaris EV opened the door to a whole new class of serious off-road vehicle.  It was built on proven electric technology of the day, and with a 48-volt, 30 horsepower AC motor and bank of eight heavy duty batteries, the new EV offered a reliable, tried and true power source in the more than capable RANGER chassis.  Everything about the chassis was extremely familiar, from its XP style bodywork, to its smooth riding suspension, to the tough rear dump box.  This was the RANGER we had come to know and love.  It would do anything most casual users needed, as long as you were careful about how far you roamed and didn’t mind tethering it to an outlet in your garage all-night.

From the driver’s seat and on the trail, the EV is completely like the rest of its internal combustion powered brothers, with the exception of a few controls.  On the dash there is a “gear shift” button, (actually a button for Forward or Reverse) and a switch for the 4wd system, along with a battery power meter, and a switch to select High, Low, or Max power modes.  All the driver needs to do is hit the “Forward” button and with foot-on-throttle you’ll be on your way.  The EV picks up speed quickly, but then again, an electric motor has about as much hesitation as a light bulb and we should have expected excellent acceleration. Sprinting down the trail at a quick pace, the EV was every bit as predictable as any of the RANGERs, but it does have a few traits completely unlike any of its cousins.  As we approached downed logs and a rocky section we backed off the throttle, but rather than rolling into the obstacles, we came to a silent stop just ahead of it.  It felt exactly like we stalled it.  Driving an electric vehicle with no engine feedback sound is a different experience and takes some getting used to.  We pressed down on the throttle and over the logs and rocks we went.  About the only noise you hear on the trail is a slight whine from the motor and driveline, and tire noise from sticks, leaves, trail debris, etc.  As with most electric vehicles, the downfall is range.  Projected range with the EV is about 50 miles depending on drive mode, terrain, and even cold weather, and that’s not enough for many, including us.  We’ve heard stories about EVs with a generator (Honda – go figure) mounted in the back, and that’s not the kind of hybrid gas – electric system that would be acceptable going forward.  The next electric Polaris will address many daunting design challenges. 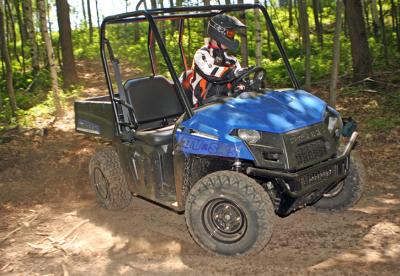 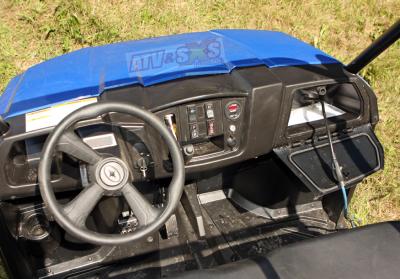 Polaris has committed to building their next generation electric vehicle in a full-sized Ranger platform, and to be in production before the New Year.  That creates some very tall hurdles to clear.  Here is what we expect from the new Ranger: 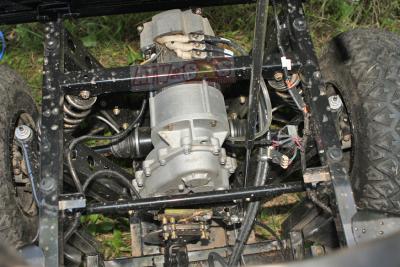 The Ranger EV took electrically powered off-road vehicles down a trail they had never been down before.  Today you can bet every OEM is exploring an electric option, and some companies like Nikola are even entering the high-performance world of electric vehicles with high-end models.  The new Ranger EV – if it is even to be called the EV – will once again break new ground for sportsman, homeowners, parks departments, cottage and vacation communities, beach patrols, and anywhere else a traditional Side x Side might not be welcome.  Electric vehicles have always been here.  Now they’re coming out of the shadows in a big way, and as long as the OEMS like Polaris can solve the problems of range and frequent charging, they’re here to stay. 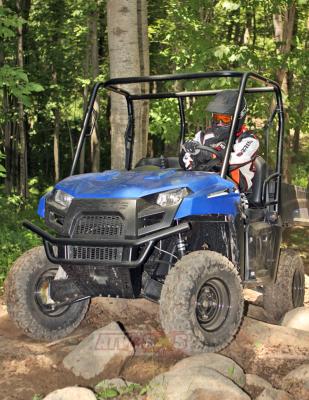