The debut race for the Arctic Cat Wildcat 1000i
Written By: 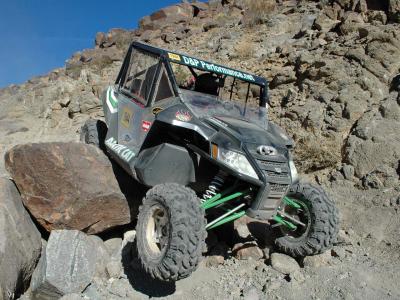 To say the King of the Hammers event is a tough race but might be a fun challenge is a little like saying a Badger has a slightly intolerant disposition but would otherwise make a fine family pet.  To even enter the event raises a whole host of questions, especially when you consider that almost 60% of those who start the race never finish, and in some classes the attrition rate is much higher than that!  This year’s seventy-eight mile course would be a combination of desert trails, whoops, and rocky passes that would lead competitors around one lap of the little slice of heaven known as the Johnson Valley near the California / Nevada border.  We’ve ridden there and the road to hell can be no worse.

It takes a special breed to wander out between the sage brush, the parched, sun bleached mountains, and the volcanic rock and think to one’s self, “This would be a really great place for some friendly competition and recreation.”  Most would never leave the truck, but 39 intrepid souls known as Side x Side racers were undeterred by either Nature or their competitors at this year’s King of the Hammers race, and we salute all those who made the attempt.  We give even more credit to their co-pilots who can merely hang on and shout instructions!  Most arrived in highly modified machines that were sure to improve their chances, but production class racers go with what the factory gave them.  Other than a few modifications for safety, the rules won’t allow for much modification when you’re running the Production class. 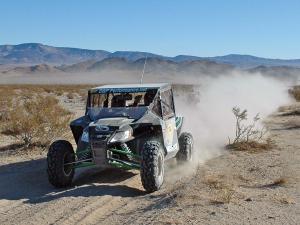 Todd Stephenson had picked up the Arctic Cat Wildcat 1000i just three weeks before the race from D&P Performance, an Arctic Cat dealer based out of Cedar City, Utah.  That left precious little time to add the safety gear and to learn the course, but he and co-driver Devin Jones managed to add the safety equipment and to get in a little early practice.  As Stephenson would say: “My co-driver Devin Jones and I had a very good game plan for the KOH. Our main goal was to take the overall and not to just win our class, and we wanted to put on a great show for the new Arctic Cat Wildcat.  We received the Wildcat three weeks before the race so we had a lot to do, but we raced in the main event at KOH last year so we knew what to expect out there.  We pre-ran the course twice in the Wildcat and once on four wheelers, so we knew the course, and we decided that we were going to run about 3/4 speed and see where it put us in the field.”

Like any desert race, Stephenson and Jones’ race was not without problems.  Starting in the 24th position they had to battle both dust and strong competitors, but after only 10 miles they had passed 12 other racers.  Knowing your machines capabilities and strengths is a big part of desert racing, and Stephenson knew everybody would be fast across the dry lake bed and he would have little chance to pass there.  It was the whoops ahead where he could use the Wildcats 18 inches of wheel travel to make his move.  “I knew we could catch them in the whoops” said Stephenson.  “Dean Bulloch was pitting for me in the first pit and he told me there were three cars ahead of us. We blew through the first pit and pushed a little bit harder until we hit the super rough area in front of us.  We had one car in front of us and we were gaining fast so we decided to chill a little bit and save the car for the last whoop sections where we knew we could make up some time. We had to stop in pit two to get fuel and my great pit crew from Ontrack Racing had us out of there in seconds.  We barely had time to get a drink.” 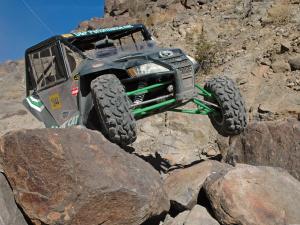 A race like the King of the Hammers is also extremely brutal on equipment, and in one section the Wildcat put itself in limp mode.  It was doing exactly what it was designed to do actually, which is get you home, albeit at a pace far slower than Stephenson and Jones would have liked.  With the constant jarring and brutal pounding the course was dishing out the Wildcat had popped out of gear, possibly by a rock.  The ECU immediately detected a condition it didn’t understand, and to protect itself and the crew it had activated the Limp Mode function and was carefully heading back home.  It’s an awesome feature for non-racers to have, although it was costing Stephenson and Jones time on the track. Finally, the pair managed to remedy the situation and get back in High gear, but the chance for an overall win was gone.  At the end they were the first production vehicle to cross the line, and only 1 min 30 sec behind the overall leader who ran a highly modified machine.  The only other Cat in the field piloted by Lanse Choumos finished 9th.  It was an impressive first outing for the Arctic Cat Wildcat any way you look at it.

After the race Stephenson would add: “The capability of the Wildcat’s suspension through this terrain is truly amazing for a stock production vehicle!  This Wildcat is bone stock except the cage, radios, seats, wheels and tires.  We had a great time and would like to thank everyone from Ontrack Racing and D & P Performance for the help. I would also like to thank Mastercraft Safety, Walker Evans Racing, Trail Gear and Warn Winches for their help.”  As Arctic Cat CEO, Claude Jordan would add, “We are extremely proud of Stephenson and Jones, and the team at D&P Performance.  Tough terrain racing is where the Wildcat really shines and D&P proved that!”

The old saying “racing improves the breed” is as true today is it was when the only racers were thoroughbred horses a couple centuries ago.  In the world of high performance Side x Sides the Arctic Cat Wildcat and the team of Stephenson and Jones have certainly shown there is a new contender for dominance in the desert.  If they can finish and even win their class at the King of the Hammers they can win anywhere.

King of the Hammers  -  www.ultra4racing.com