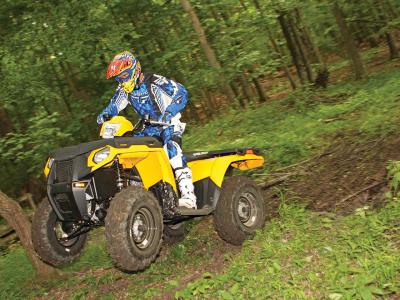 If there is one machine that defines the do-it-all, hardworking and hard playing utility ATV, it is the Polaris Sportsman 500.  They’re practically mandatory at every hunting camp in the country, and they’re on every trail regardless of whether it’s a Louisiana swamp run or a climb into the snow covered mountains of Idaho.  Along the way, they became the best-selling ATV ever built.  Nearly all were abused occasionally, if not on a regular basis, with some owners completely ignoring any regular maintenance; yet the Sportsman was always ready for more.  We’ve seen them pull a fully loaded hay wagon one day and then head out for a recreational trail ride the next, with the owner knowing he could count on his Sportsman for both.  It’s time to take another look at the machine that made Polaris an ATV powerhouse.

It may be the XP models that get all the glory in the Polaris lineup these days, but before the XPs, the Sportsman ATVs were king.  When Polaris introduced the XP models, rather than discontinue the old model, they kept the original Sportsman in the lineup and today it’s called the Sportsman 500 H.O.

The heart of the Sportsman 500 H.O. is a single cylinder, 498cc, liquid cooled engine fed by a 40mm Mikuni carburetor.  Although electronic fuel injection has become standard on pretty much all new ATV designs, it certainly increases engine management complexity and overall cost.   Mated to the engine is a CVT system Polaris calls PVT, but whatever you call it, the carefree CVT system requires no shifting and is a very welcome feature for new or less experienced riders, or for those just looking for convenience in their ATV.   Polaris was a pioneer with CVT driven ATVs having introduced them while everyone else was still relying on a foot shifter.  Thanks to their extensive experience with CVT systems on their snowmobile lineup, they pretty much perfected it and the CVT became the industry standard for utility ATV transmissions. 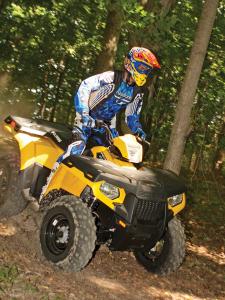 Polaris wanted to make the Sportsman easy to operate, and the CVT transmission was a huge step in that direction, but the creature comforts didn’t stop there.  The Sportsman 500 H.O. features a center mounted, digital instrument pod that tells a rider everything they need to know about fuel level, gearing, mph, RPM, and even maintenance items.  The pod also has a simple choke knob to help with starting on cold mornings, and once running the rider really never needs to take their hands off the bars.  We would love to see Polaris ditch the huge thumb throttle assembly for the compact unit found on the XP models though.  To get rolling, all you need to do is select either forward (high or low) or reverse with the right hand mounted gear selection lever, point it where you want to go, and you’ll be on your way.  If the trail gets a little wet, slippery, or rocky, simply hit the thumb mounted 4wd switch and the front wheels will kick into gear and pull you along when it detects wheel slip, and then revert back to 2wd when no longer needed.  It’s not going to get much easier!

Suspension on the Sportsman 500 H.O. again falls back on a Polaris standard.  At the front are a pair of McPherson struts, while at the back is a shaft drive Independent Rear suspension system – another Polaris first that has become an industry standard!  Ground clearance is a very respectable 11.25 inches, but the best feature is the ride.  The Sportsman ATVs were always some of the smoothest on the trail, and this design still delivers a ride smoother than just about everything else other than its stable mate, the XP models.  Disc brakes are found at both ends to get everything stopped, and there is a handlebar mounted lever along with a foot lever, but we have always wanted a second handlebar mounted lever as well.  About the only drawback with the chassis is the relatively high overall weight, and the 500 H.O. comes in at a portly 696 lbs. 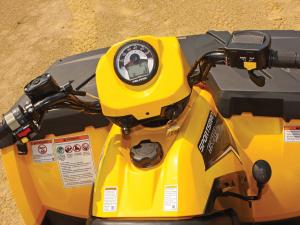 With every model we test, we are always concerned about regular maintenance.  The easier regular maintenance is, the more likely it will get done.  Thankfully on the Polaris (and unlike some competing models), those items are still easily performed.  The air box is easily accessible under the seat, and the filter even features a nylon, water repellent cover which helps it stay both clean and dry, as does the high air intake location.  One of the handiest maintenance features is that both the dipstick and oil filter are easily accessible with no extra panels to get in the way or to remove first.

Rather than stick with the old bodywork design, Polaris gave the 2012 500 H.O. new bodywork that matches its XP brothers.  That’ a great thing!  The large seat is both comfortable and soft enough for all day rides, and overall feel is roomy yet not so big that it feels intimidating.  Down below, your feet ride on integrated foot pegs and floorboards – another Polaris innovation – and they generally do a good job, but sometimes we wish the pegs were slightly more aggressive or taller.  When they pack up with snow or mud, they can get a little slippery.  Most of the time, they drain water away quickly, but we did notice a couple times water would splash through the engine compartment onto the opposite leg.  We’ll take it though. 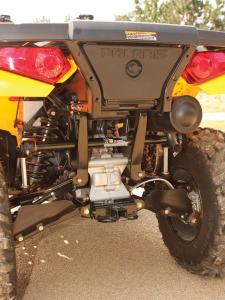 One area where Polaris has always commanded a HUGE advantage is with storage, and the Sportsman 500 H.O. does not disappoint.   Behind the seat is an enormous storage compartment, but under the front hood is one practically big enough for your bow!  We can’t say too much about the front hood storage area!  It’s water resistant, it holds a TON of gear, and we LOVE IT!  The best part is, it’s standard on the 500 H.O. and it’s an option on the XP models.  Thankfully, Polaris was able to include it even though they raised the radiator for better protection.  True to its Sportsman name, the 500 H.O. is made for venturing deep into the woods, and is equipped to carry and store enough supplies to survive a very long time.  If you can’t get it inside the storage compartments, you can easily tie it down on the composite racks.  If that still isn’t enough, Polaris also offers accessory boxes that fasten securely to the front or rear racks.  For towing any load, the Sportsman 500 H.O. also features a receiver style hitch.

One of the most important features to buyers of any ATV is overall power and power delivery.   While the Sportsman 500 H.O. isn’t going to provide the hard hit of a 700cc or 800cc quad, it does have plenty on tap, and delivery is smooth and manageable.  Hit the throttle and you can conquer almost anything found on the trail or the way to the duck blind, and it’s got enough to get almost any job done.  For most riders, it will be perfect.

While power delivery plays a factor in overall ride quality, suspension action is equally important, and the Sportsman 500 offers a very plush ride.  In fact, the suspension is so soft that we believe that a slightly firmer dampening spec from the factory would work better in more aggressive conditions, and would take most of the suspension work off the springs.  Most riders will be very happy with the suspension just as it comes from the factory though. 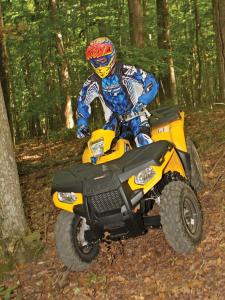 We especially like the stock Polaris tires.  They’re great overall performers and if the trail or field gets muddy, the open tread pattern digs in to pull you through.  On the hard trails, they ride very well with predictable handling, and since the compound is a little softer, they are even able to grab a solid grip in the rocks.  However, since the compound is slightly softer for better traction, you will probably notice a little quicker wear on the edges, but we’ll always take the extra traction.  One feature we found curious though was engaging 4wd while in reverse.  When in reverse, it seems 4wd is disengaged, and the only way to keep it active is by holding the override button.  We usually don’t want to be fooling with an override button when we’re trying to keep from getting hopelessly stuck.

The Sportsman 500 H.O. is a very, very good ATV by any standard.  We have yet to find something it was designed for that it couldn’t do, and just like most Sportsman owners, it will go to work all week and be ready to play all weekend.  While there may be a few newer competing models that really excel in one area or another, the Sportsman 500 H.O. delivers a comfortable ride in an easy to handle and easy to operate package at a very attractive price.  It’s the working man’s ATV and it will not let you down.