A Snow Trek on the 2016 Kawasaki Teryx
Written By:
Staff 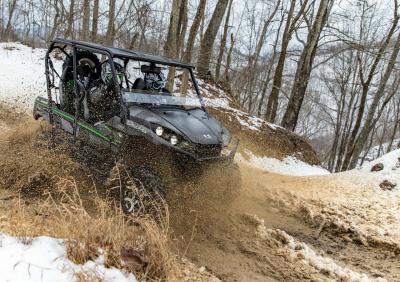 It wasn’t supposed to be a trek through the snow. When Kawasaki called asking if we would like to try the 2016 Teryx Side x Side on the trails of HatField-McCoy, we were quick to grab our helmet and gear with thoughts of the West Virginia Mountains in mind. It’s always great to get a chance to ride the Hatfield McCoy Trails, but I was a little worried when we started seeing the news about Winter Storm Jonas. Just three days before our ride, the storm dumped 18 inches of snow on southern West Virginia, but Kawasaki reassured us, the adventure was on and we were up for the challenge.

Just getting to West Virginia was a travel adventure as heavy snow played havoc with flights across the East Coast. Luckily, most made it, and the ride officially started with a Kawasaki Product Manager, Kevin Mann, giving a detailed walk around of both the 2016 Teryx and Teryx4. He mentioned that the Teryx platform is a mix of both sport and utility and that the Teryx4 is the perfect vehicle for a family adventure. We’ve spent tons of time on previous Teryx models across all types of terrain from the desert Southwest to Northern forests, and we’ve never had one let us down. We’re convinced the Teryx is the toughest, most reliable Side x Side on the trails. Still, we would be happy to get to play with an updated 2016 model. 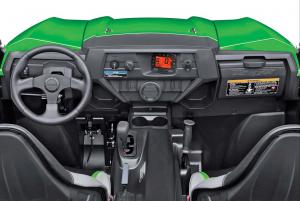 The first thing you notice on the 2016 Teryx and Teryx4 is the new aggressive styling of the front end, including four LED headlights on the LE and Camo models that offer regular and high beam and are controlled by two separate switches. Access to the hood has changed from a front hinge to an easily removable panel. In the cockpit, there are even more changes as Kawasaki added tilt steering and an over-molded steering wheel. The front seat is now easily adjustable into three positions without the need for any tools. Additionally, they have added a new dash with a carbon fiber-styled look that includes knockout places for accessory switches as well as an area specifically shaped for a Jenson radio and speakers. We also love the seats on the Teryx.

Under the hood, Kawasaki has continued to use its powerful 783cc, V-Twin engine paired with the belt driven CVT. The CVT would definitely be put to the test on the ride, as engine braking would be paramount on the slushy trails.

One of the most noticeable changes to the 2016 Teryx is the revised suspension setting on the FOX Podium 2.0 shocks. This is about the only area where we felt Kawasaki needed to make an improvement from previous models, and we were happy to see they put the time and effort into upgrading their suspension package. While still offering eight inches of travel in the front and 8.3 inches of travel in the rear, the new settings offer a plusher ride while also giving the driver the confidence of control.

Storage is also hugely important on a Side x Side, and the two-seat model still features two 24-gallon storage boxes that close from the top and kept all of our gear out of the elements. It also has a 600lb. cargo capacity on its tilt bed that features Kawasaki Quick Release (KQR) rails for accessories. The four-seat Teryx4 has a smaller cargo but with 250lbs. of storage and features theater-style seating for the rear passengers. 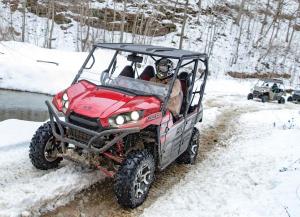 Living in the North, I’m accustomed to snow riding and I know it can completely change a vehicle’s handling traits. The key to the snow is to be smooth and gentle, rolling on and off the throttle and brakes. The first thing you have to do is prepare yourself for the weather, and that means dressing for the cold. A good, waterproof and warm jacket is mandatory, as are warm boots, thick gloves and a balaclava under the helmet to keep your nugget warm. With expert drivers from the Hatfield McCoy Trails leading the way, we made a slow ascent up into the mountains on the Rockhouse Trail. Having driven the trail before, I knew it was aptly named as it seemed to be carved out of the rocky mountainside, but on this trip the layer of snow covered the rocks so deeply we rarely noticed they were even there. As we continued on our trek from Man, WV to Gilbert, WV, we slowly picked up the pace as everyone in the group became more accustomed to the conditions. One of the first things I noticed was the new suspension setting on the Teryx. The ride felt smoother than in the past and at one of the photo stops, I made an adjustment on all four corners to make it a little stiffer. The adjustment was more noticeable as we picked up speed in one of the valleys, cruising along in slushy snow at full throttle. Just before the Gilbert trailhead, there was a long downhill section where I shifted into low gear to see how well the engine braking would handle the icy conditions. I had a lot of confidence as I descended the icy trail without once touching the brake pedal. You’ve got to be gentle on the pedals in the snow!

We finished the 25-mile journey to Gilbert right around lunch time and the rain started to fall while we were at the restaurant. It slowed considerably as we headed back to the trails. The rain added to the slush and also the fun as we were able to pick up the pace on the way back to Man. After over 50 miles of trouble free riding in a winter wonderland, our adventure was over. It was another epic Kawasaki trip not to be forgotten, and once again, the Teryx was perfect!

Kawasaki didn’t let us down with the new Teryx and Teryx4. Our day in the snow was a blast and we can’t wait to get one to spend some time in on our home turf and trails. Thanks again Kawasaki! 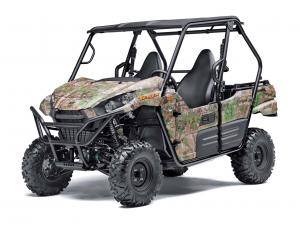 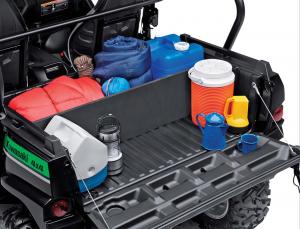 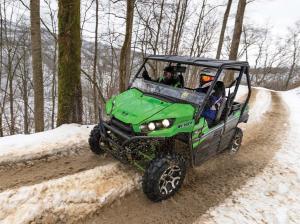 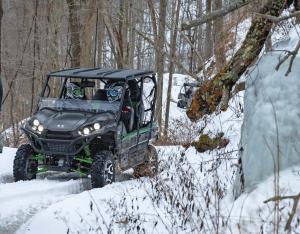 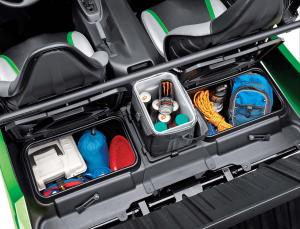 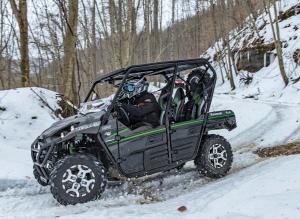 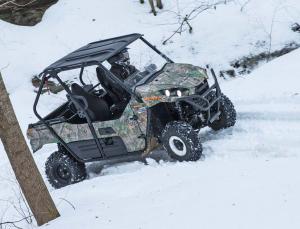 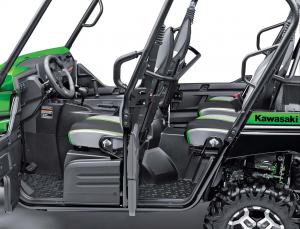