We Install a Set of Walker Evans Shocks on our RZR 800
Written By:
Pete Bengel 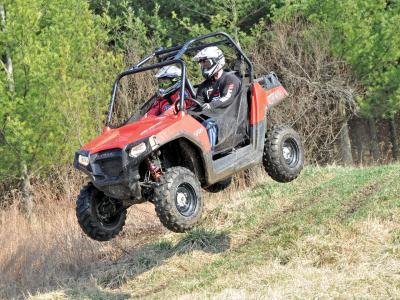 SXS vehicles are like dandelions… new models are popping up all over the place.  Almost every major manufacturer now has at least one model on the market, each with its own design, style, features, and level of performance.  But even bigger than the explosion of SXS vehicles into the off-road market is the explosion of OEM and aftermarket performance parts and accessories.  From the off-road parks to the trails or the sand dunes, it’s hard to find a SXS out there that hasn’t been modified in some way.

Clutch kits, exhaust systems, power programmers, and even turbochargers are common performance parts that can be found on many vehicles, but one of the most significant performance gains for your SXS can come from an area that many people overlook - suspension!  Any horsepower increase can quickly be negated if your skid plates are in the dirt or your tires aren’t planted on the ground.  In fact, even an un-modified engine can perform much better if your suspension is under control. 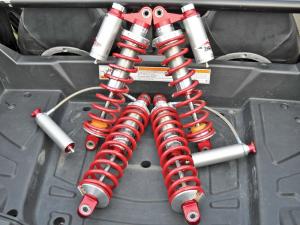 Recently, we upgraded our Polaris RZR 800 suspension with a set of high performance, Walker Evans Racing, 2.0 coil over shocks.  These shocks feature high volume 2” bodies, large 5/8” shafts, remote or piggyback reservoirs with 16 clicks of compression adjustment, and are fully rebuildable and revalveable so they can be tuned for any condition.   They also use spherical bearings on each mount for bind free performance at the pivot points.  The Walker Evans shocks are extremely well built (in the USA, we might add!), and bolt right in to the stock mounting points with no modifications.  Armed with only a floor jack and a couple of wrenches, we had our OEM shocks removed and the Walker Evans shocks installed in well under an hour and were ready to ride! 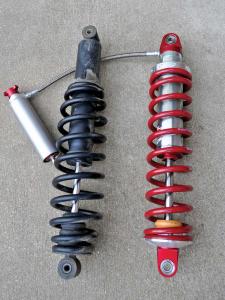 The first thing we noticed with our Walker Evans shocks was that the RZR 800 now had a very solid feel to it.   Steering was much more responsive and the RZR would follow a line much better without the tendency to roll to the outside and push through the corners.  Every turn of the steering wheel was more precise and we felt as if it took much less effort from our hands to control the front wheels.  In stock form, the RZR is a little bit tough to slide, but the firmer Walker Evans shocks keep the body roll to a minimum and it’s actually much easier to do a little drifting with the 50” RZR.  Out back, our shocks really cut down on the amount of bucking and hopping that we had accepted as a norm on our RZR, especially once the stock shocks got hot.  The Walker Evans 2.0’s larger volume really helps to keep the oil temperature under control and do a much better job at dampening impacts from the start of the day all the way through the last bump, no matter how many you find.

As much fun as it is to get a little air with a SXS, doing it with low end shocks is a bad idea and will usually lead you to a large repair bill and an appointment with a chiropractor.  Getting your SXS airborne isn’t so hard, but the landing usually sounds like a bucket of quarters being dropped on concrete.   We managed to find a little bit of airtime with our Walker Evans equipped RZR 800, and it was surprising how much easier the landings were.  Right out of the box, our compression adjustable shocks did a much better job at absorbing the impact than our stock shocks.  We did manage to bottom a little bit, but a couple of clicks on the compression adjusters had our landings back under control with no more SLAM at the end.

The Walker Evans shocks have brought our RZR’s handling to a new level and have also helped to maximize the gain from other modifications.  We are always happy to install parts that give us more comfort and control because it equates to more ride time.  At $443.99 each, our Walker Evans shocks were money well spent!