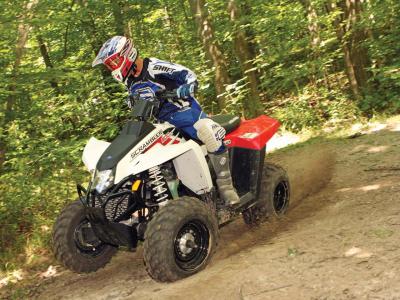 When it was introduced almost two decades ago in 1995, the Polaris Scrambler 400 made tracks into fresh territory. Before it there were only two ATV categories, sport and utility. The Honda 400EX, the Yamaha YFZ 450R and the Can-Am Outlander 800 weren't even on the drawing board, and custom built chassis ruled the racetrack, while the utility quad world was heavy on the utility side. Single cylinder, 400cc engines were the big bore powerhouses of the day. It all sounds like a tale that begins with: “A long time ago in a galaxy far, far, away…”

The Polaris Scrambler was introduced to bridge the gap between pure sport ATVs and utility models by offering some of the benefits of both. Originally equipped as a 400cc two-stroke, today the Scrambler 500 4x4 gets down the trail with a time tested, tried and true, 500cc four stroke engine. Actually the entire Scrambler would qualify as time tested by anyone’s definition, but that’s not necessarily a bad thing. 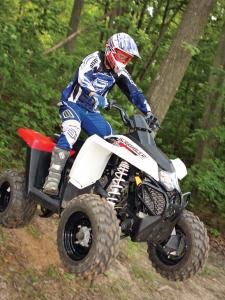 Underneath the bodywork, the Scrambler 500 4x4 rides on a steel tube chassis which Polaris beefed up in 2010. True to its sporty nature, at the rear Polaris gave the Scrambler a steel swingarm, a single shock, disc brakes, a solid axle, and chain drive with a super easy to use eccentric chain adjustment system. Total rear wheel travel is 10.5 inches. The front of the Scrambler is more like a utility ATV with shaft drive, dual disc brakes, and MacPherson struts offering 8.2 inches of travel. At the front is a nice, good sized bumper that does a good job of protecting front end components but also provides excellent hand holds for anytime you need to wrestle the Scrambler around. At a portly claimed dry weight of 559 pounds, the Scrambler is no light girl, so let’s hope that's not too often!

The Scrambler engine is a liquid cooled, 4 stroke mill fed by a 40mm Mikuni carburetor rather than EFI. Mated to the engine is a CVT transmission offering Forward, Reverse, and Neutral, and new riders will appreciate the simplicity. Unlike most true Utility ATVs, however, the transmission does not feature a Low working gear. We like the 500cc engine, but it takes the CVT a moment or two to catch up when you crack the throttle open. This makes the motor feel a little sluggish at first, which probably has more to do with the old style CVT system rather than the engine. A high performance roller clutch style CVT like Polaris uses on the Sportsman XP models would undoubtedly wake it up.

The first thing anyone notices on the Scrambler is the bodywork which is bright, pliable and durable. Clean, aggressive styling lines speak to its sporty nature, but the big seat also promises comfort for all day trail rides and it does not disappoint. Rather than a set of foot pegs, Polaris outfits the Scrambler 500 with full floorboards, but there is a foot peg molded into the plastic. It does a decent job of anchoring your foot, but we feel it could be slightly taller and more aggressive. There are no racks for hauling gear on either end of the Scrambler bodywork and we never really missed them, but Polaris does offer racks as a simple bolt-on accessory.

Controls on the Scrambler are easy to understand. On the left handlebar is the switch for the center-mounted headlight, the ignition switch, and the single brake lever which controls both the front and rear brakes. On the right bar end is the over-sized thumb throttle, and the 4wd/2wd button. In the center of the steering column is a choke button, a couple warning lights, and the key. Just down below is a compass style fuel gauge that gives you an idea of how much fuel is left in the four gallon tank, but be aware this type of gauge is never overly accurate so plan long trail rides accordingly. Just to the left of the tank is the gear shift lever. 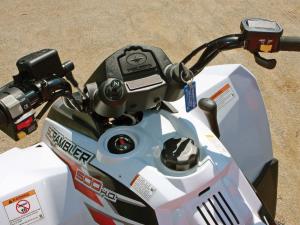 Since the Scrambler 500 4x4 is meant for trail fun, we set off to conquer every type of terrain we could find. We would be climbing over logs, crawling through the rocks, diving into deep water and mud, and sprinting down sandy trails.

Once aboard the Scrambler, riders quickly notice it has a seating position like nothing else. The big, plush seat quickly lets you settle into place, but the handlebars are decidedly old-school in their height as compared to the seat. It reminds us very much of the seating ergonomics on a snowmobile, which shouldn't come as much of a surprise considering Polaris is one of the leaders in that market. We would much prefer a lower bar that allowed us better arm leverage and put the rider in a more aggressive position rather than “cruiser” mode. We do like the control layout, however, but we would also ditch the oversized, knuckle-grating thumb throttle for the vastly superior throttle assembly found on the Sportsman XP models.

It was easy enough to start the Scrambler, and with a little help from the choke and a twist of the key, the engine sprung to life. The starter isn't as quiet as those from the XP engines, but it gets the job done, and after a short warm-up, we slipped the gear shift lever into Forward and turned into the wild. On the trails the Scrambler lives up to its promise for fun, sporty performance. The engine revs out nicely and the clutch pulls all the way to the top end. It was fun to cruise down the trails and rail sandy corners, but it's also hard to forget the Scrambler is relatively heavy and you aren't going to push it around with body English. When gliding into the corners or down hills, engine braking was noticeable but very controllable, and we consider it about perfect for this machine. When using the disc brakes, we do sometimes wish for separate front and rear brake levers on the handle bars, but the single lever gets the job done which is a good thing since the rear foot brake lever is so high it's easier to get your foot under it rather than on top of it in a usable position. Suspension action is also very plush, and most trail bumps are soaked up with nary a hint of feedback to the rider. 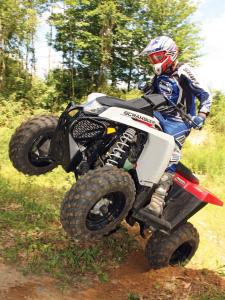 It didn't take us long to find mud on the trails and long water holes would be a good test for the tires and 4wd. We kicked the button into AWD and plowed into the pond. The Scrambler immediately responded with all 4 wheels clawing for traction and paddling through the water. We easily crossed every water hole on the trails whether only a few inches deep or nearly up to the seat. We were equally glad that the CVT intake was high enough we didn't get the belt wet, but should that happen there is a CVT drain plug to help you quickly drain it. Log crossings were also much easier in 4wd, and even when casually riding the trails, we often left the Scrambler in 4wd with no increased steering effort. It's much easier to rail through the corners on some trails with all four wheels digging.

We don't just take a machine out for a quick ride and proclaim it worthy of your needs. We want you to know exactly what to expect from every machine we test and we still had a great deal to learn about the Scrambler that only many trail miles would tell.

It didn't take us long to find the Scrambler idle was set too high by the dealer. We expected it to be a little high on a brand new engine, but after a lengthy break-in period, it was not returning to a lower idle range so we adjusted it at the carb. The previous idle limit had been so high it was at the point of CVT engagement which made shifting very notchy, and reducing idle RPMs definitely helped it go into gear much more smoothly. We also had a belt failure at about 400 miles, most likely due to a high idle condition that was trying to engage the CVT, and the result was a scored or burned belt, but it was easy enough to replace. 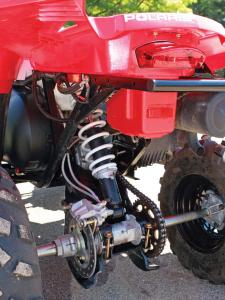 Thankfully, maintenance tasks are extremely easy on the Scrambler 500 4x4. The paper air filter is right under the seat and can be removed quickly, and a nylon filter skin keeps heavy grit from clogging it. Oil filter access is also excellent on the left side of the engine, and a large dip stick and oil fill hole make oil changes a breeze.

We do like the tread pattern and compound of the Carlisle tires which ride well and do a good job in most conditions, but their one drawback is they are prone to cuts which can be fatal in the sidewall. Far more common, however, is a bent wheel from the butter-soft stock rims which can practically be deformed by kicking the tires. Be aware when riding in any rocks!

Since the Polaris Scrambler was introduced, ATVs have changed greatly. Sport quads now range from mild-mannered intro models to high-strung racers, many of today’s utility quads far outperform and out-handle the sport quads of a couple decades past, and new models with more features have jumped into the crossover category to compete with the Scrambler 500 4x4. There is only one original, however, and even though it could benefit from further updates, it's still doing what it has always done best: providing lots of trail exploring fun.