RZRs Shine at Best in the Desert’s Bluewater Desert Challenge 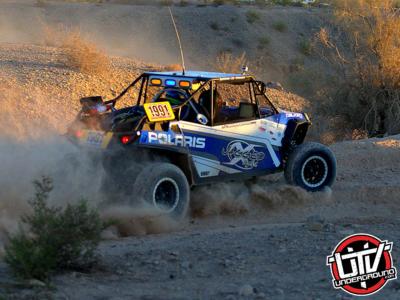 Minneapolis, Oct. 16, 2012– Best in the Desert’s Bluewater Desert Challenge is a two-day race, consisting of 75 miles raced each day, in Parker, Ariz. This fast-paced race takes a lot of strategy to ensure a finish after two days of racing through the harsh terrain of Parker’s desert.

After the dust cleared from the two-day race, Lambert and the Cognito Motorsport’s No. 1918 would take the Bluewater Desert Challenge. Schueler and the No. 1919 took the checkered flag on Saturday’s race but some trouble plagued his car and teammate Park’s No. 1932 on Sunday after the two racers were running first and second. Schueler ended up finishing fourth overall and Parks eighth. Coastal Racing’s No. 1934 would finish the race fourth overall with a sixth place finish on Saturday and a first on Sunday.

Jagged X’s Bill Schueler and Polaris Marketing and Sales Director Craig Scanlon in the 1991 RZR XP 4 900 proved once again that their almost-stock RZR XP 4 900 was a force to be reckon with finishing the weekend in first in the Sportsman class and sixth overall. The car continues to prove the power, suspension and agility possessed by the RZR line of side-by-sides.

The next and last of the 2012 Best in the Desert Race series is the Transwest Ford Henderson 250, November 30-December 1, in Henderson, NV.