RZRs Start Strong at WORCS Round 1 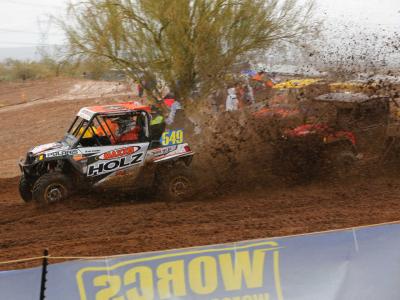 Minneapolis, January 28, 2013- Canyon MX Park, in Peoria, Ariz., saw a flood of RZR vehicles in what would be a rainy, muddy first WORCS race of the season. With a track that looked more like a mud bog, RZRs showed their versatility taking the Pro Production, Production 1000, Production 850, Production 700 classes, and the lone win in the Production 600 class.

The Production 1000 class was dominated with RZRs and saw Mitch Guthrie Jr. in his Holz Racing RZR XP 900 take the checkered flag. Robert Mowrer and Michael Gonzales in their RZRs finished second and third.

Defending Production 700 Class Winner, Cody Rahders, was the loan RZR 570 racer in most of last year’s classes but saw three other RZR 570s in the first race of this season. It’s apparent that racers were taking note of Rahders successes last year and the class saw only RZR 570s line up for the first race this year. When the mud settled, Rahders would take second place to Holz Racing’s Michael Bunyea with third going to Matt Hancock.

The next WORCS race is Buffalo Bills, in Primm, Nevada, February 8-10.