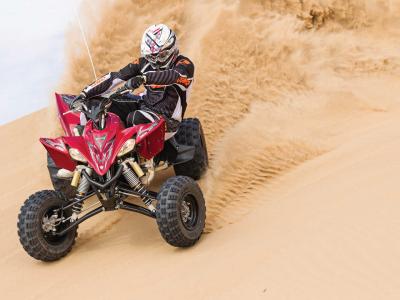 While we love driving Side-by-Sides, we are true die-hard ATVers to the core, and there is nothing quite like swinging a leg over a pure-sport ATV. Unfortunately, those pure-sport ATVs are getting fewer in number as budget shifts and the EPA have dragged and dropped a fair number of great quads right into the recycle bin. If the new directive with some manufacturers is to cut back on sport ATVs and jump on board the SxS bandwagon, Yamaha must have missed the memo. Their 2014 YFZ450R SE and Raptor 700 SE clearly show that they have no intention of leaving their sport ATV customers behind!

We had a chance to fly out to Glamis to check out Yamaha’s new Special Edition models of the YFZ450R and the Raptor 700R. Yamaha could have brought us to a motocross park or someplace with tight trails to showcase their sport ATVs, but in a bold move they chose Glamis. If you haven’t been there, Glamis (California’s Imperial Sand Dunes) consists of a couple hundred thousand acres of sand and a seemingly endless range of steep, soft, power-robbing hills that cater far more to the 100+HP roll-caged 4x4 sand car than a sport ATV. Traveling much beyond the parking area on an ATV definitely requires a certain level of riding skill and very capable equipment. Heading out into the dunes half-heartedly on a clapped-out 1987 Suzuki QuadRunner would be a foolish thing to do at best, and could be downright dangerous when daylight starts to fade away. Fortunately for us, Yamaha stocked up a truck full of 2014 Special Edition YFZ-Rs and Raptors, ranging from stock to modestly modified, for our duning pleasure. 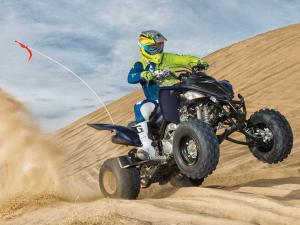 For 2014, the Special Edition Raptor 700R comes in either Midnight Blue or Metallic Gray and White, each with their own unique “tribal” graphics. Also included with the SE package are a special GYTR front bumper and heel guards.

The Raptor 700 is, for all practical purposes, the best sport ATV on the market when it comes to sand dunes. The 686cc fuel-injected, liquid-cooled, 4-valve thumper produces gobs of torque and revs to an incredible 9000 RPM before it hits its rev limiter. Whether you’re the type of rider that likes to lug along a gear high or you like to let ‘er breathe, the Raptor 700 has what it takes to climb, slide, and shred the dunes effectively. EFI (Electronic Fuel Injection) fuels the big 4-stroke precisely from low RPMs that rival a John Deere B all the way up to the rev limiter and vibration is very low thanks to dual counter-balancers, letting your hands stay strong for all-day rides.

All the power in the world means nothing if you can’t deliver it to the wheels, and the 700’s clutch and transmission deliver the goods effectively. Gone are the days of using 4 fingers to pull the clutch lever… the Raptor can be done with a finger or two. Clutch actuation is firm yet smooth and predictable and the 5-speed transmission shifts without any drama, even under power with partial clutching. 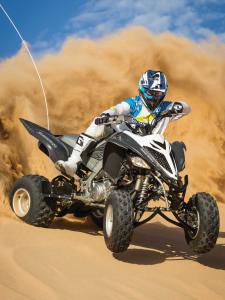 While the engine cases are plenty wide between your feet, the Raptor’s seat and tank junction are reasonably thin and smooth and allow you to move forward, back, and side to side easily. The one complaint we have in this area is the seat foam. As with previous years, the Raptor’s seat is comfortable for sitting down, but our legs tend to find the corners of the seat plastic easily if we hang off the side much at all. We would like to see dual density foam that keeps the plushness in the center but would provide extra support on the sides. The stock handlebars are a good combination of comfortable and aggressive, but we’d really like stronger “fat” bars on the SE model.

YFZ-inspired fully adjustable piggyback KYB shocks grace both ends of the Raptor 700R and SE models, and are high and low speed compression, rebound, and preload adjustable. You can’t be king of the dunes if you’re bouncing and bottoming all over the place, and the sport-tuned KYBs have all of the adjustment you need to keep the Raptor’s power to the ground and bring it down under control if you catch some air. The sand at Glamis was particularly choppy on our trip, but backing out on the low-speed compression kept the feedback from the bumps and ruts under control, while the high-speed damping sucked up the big hits and jump landings. 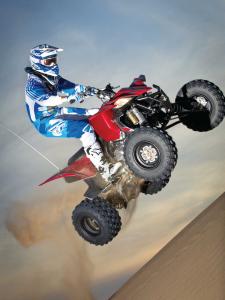 If the Raptor 700R is the King of the dunes, the YFZ450R is definitely an heir to the throne. While being geared more for high-performance trail use or motocross racing, the YFZ-R has always held its own in the steep and deep. For 2014, several significant changes make it better than ever.

The 2014 YFZ450R’s 449cc 5-valve fuel-injected thumper features a new stronger crankshaft, all new cam profiles, increased compression, and a new exhaust that boosts power right off the bottom which was perfect for our couple of days in the Glamis sand. The updates give noticeably more punch to an already potent engine, and allowed us to power up to the peaks, blast monster sand waves, and power down the hills with more ease than ever, and that’s when another upgrade becomes extremely evident. Also new inside the cases for 2014 is Yamaha’s exclusive assist and slipper clutch that decreases clutch effort while reducing engine braking and feedback over braking bumps. In a word, the new clutch is phenomenal! At the end of a long day of duning, we typically find ourselves getting lazy and just ramming home the next gear with no clutch. This isn’t the case with the new clutch. The easy pull and awesome performance allow us to use the clutch properly all day long. As awesome as the new engine and clutch work on the dunes, we can’t wait to get one on the motocross track!

Since 2009, the YFZ-R has boasted the best stock suspension on any sport ATV, and if they’d have left it alone for another year, it would still be the best, but… they didn’t! The entire suspension has been redesigned to make it stronger and lighter with more travel and less geometry change throughout the travel making this the best riding and handling YFZ to date. The large-body Kashima-coated KYB shocks have new valving and longer shafts for increased plushness, adjustability, and suspension travel. The result is a super comfortable ride, awesome cornering, and the ability to land any sky shot with ease. 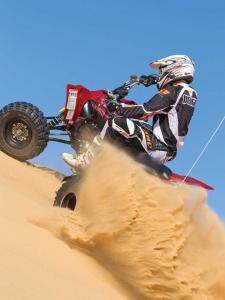 There are many subtle, yet incredibly effective changes to the body work for 2014. Spacing between the front and rear fenders has been increased and the heel guards have been relocated to give the rider more room to move, and the side shrouds have been redesigned to increase comfort. These may seem like small potatoes items, but it makes a significant difference in reducing fatigue to keep you riding stronger for longer, and you’ll feel a lot less worn out at the end of a long day of duning or racing.

In addition to the performance changes for 2014, Yamaha has given us two absolutely incredible looking Special Edition models that will set you apart from your friends with the traditional blue machines. One is crimson red with black accents, while the other is black with crimson red accents. Custom GYTR bumpers also set the Special Edition YFZ450R apart from the base models.

As the industry’s focus shifts increasingly to side-by-sides and UTVs, we applaud Yamaha for sticking with their faithful ATV customers and not only offering us options in sport ATVs, but continually improving those models. There’s just something about the feel of swinging a leg over the seat and a set of handlebars that you just can’t get when you’re strapped to a bucket seat, and as the 2014 Raptor 700R SE and YFZ450R clearly demonstrate, Yamaha has no intention of banishing you to a life inside a roll cage.