Erika Throws the Biggest Bash in the East
Written By:
Staff 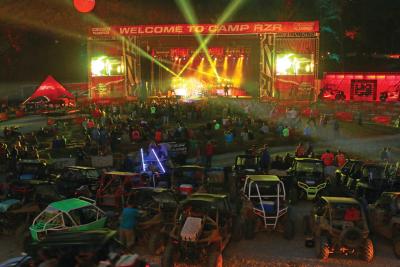 When a weekend off-road event draws more people than almost all NBA teams, it’s clearly something special. After last year’s record turnout at the wildly popular Polaris Camp RZR event held at Tennessee’s Brimstone Recreation, promoters Mark Love, his daughter Erika, and the Polaris team really mashed the throttle to the floor for an even bigger and better event this year. Goal achieved!

Tennessee is the heart of Eastern style ATV and Side x Side recreation, and there are numerous excellent trails and ride parks all within an easy day’s drive. Perhaps none are as well-known as Brimstone Recreation just outside Huntsville. Deep in the hills of northeast Tennessee, Brimstone is an enormous outdoor recreation area of over 19,000 acres and three hundred miles of trails, from casual to the “don’t let your mother see you try this” variety. At this year’s event, smiley faced riders showed up in droves to try every obstacle the mountains could throw at them. No doubt none of them went home disappointed or unchallenged.

Camp RZR is really a celebration of all things off-road, and isn’t strictly limited to Polaris rides, although they are by far the majority in attendance. With Polaris as the title sponsor of the party, you can bet there is Polaris stuff everywhere and attendees could check out Polaris displays, try new models in a demo ride area, browse vendor booths, or just hang out and camp with their buddies – or upwards of 20,000 new friends! Of course trail riding is a big part of the event and riders were encouraged to go explore the hills. There were even contests to find stuff hidden in the woods. Other highlights of the weekend included mud bogs, guided rides, an obstacle course challenge, a kid’s zone, and plenty to keep you busy for the entire time. 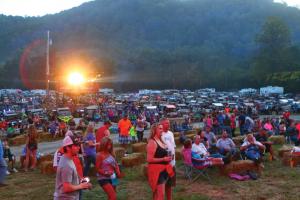 The trails at Brimstone are as varied as the terrain, and wide open trails invariably lead to tighter sections, but along the way you’ll find rocks, tight trees, plenty of mud which claimed more than a few riders, and even a little sand. At the top of the hills, the views are breathtaking, but nothing is quite as entertaining as the steep hill climbs.

It’s amazing what some riders will try to conquer with nothing more than a slight nudging from their buddies. It seems no amount of deep ruts, protruding tree limbs or exposed roots, and slippery rocks will deter them from the challenge of a nearly impossible climb, and the thought of cartwheeling their $20K dirt toy back down between the trees while strapped inside is surely not a concern. Time after time we saw riders attack hills that would make a goat find another route, only to become hung up at the top, as the cooler strapped in the back overflowed from the extreme angle and spilled its contents across the landscape. Cans that somersaulted their way to the bottom of a hill like an aluminum rock slide tended to burst on impact, creating little rivulets of foam, also to the delight of the crowd.

Second to the entertainment of the hill climbs is mud, and at Brimstone you can find it easily. In fact, we found a little too much at one point and had one of those “I think we’re in big trouble” moments. The thing about the mud and standing water at Brimstone is, you never know how deep it is, or where you can pop out of it. No doubt hundreds of riders have been through the same spot before, and that means they’ve carved it out nicely for you. One second it’s only a few inches deep, and the next it’s coming over the wheels. When we waded in too far in one spot, the only recourse was to pin it to win it. As wide-eyed spectators looked on, our RZR 1000 leapt ahead like it had been shot in the tail, and we bounced and clawed our way across the pond, finally scrambling out on the other side like a starving gator after a thirsty gazelle. Lesson learned! 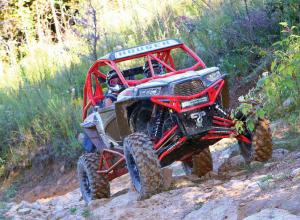 After a rousing day of testing the new ACE 900 SP and RZR 1000S, it was time for the evening activities and Polaris really went all out with this. A HUGE concert stage had been erected, along with all the support equipment and full concert lighting. There was even a VIP hospitality tent and luxury trailer, complete with big screen TVs, a rooftop viewing platform, tasty treats, and most importantly, flowing beer. It was going to be a great place to spend the weekend!

The concert in the hills was unlike any we had ever been to, and it was also one of the largest. As darkness closed in, riders crowded in line with their machines, creating the largest parking lot of off-road toys likely ever assembled and covering the entire meadow. Up near the front you could pull up a comfy hay bale and enjoy the top notch entertainment from Chris Lane & Jon Pardi, followed by Old Dominion & Jake Owen on Saturday. No concert would be compete without proper lighting, and as the music echoed throughout, green beams of light spelling out Brimstone or Polaris were projected on the mountains behind. It was VERY cool and no expense was spared at putting this event together. Polaris even gave away a couple new RZR 1000’s, along with over $200,000 in other stuff. It was a big time event, and then they repeated all of it on Saturday night! 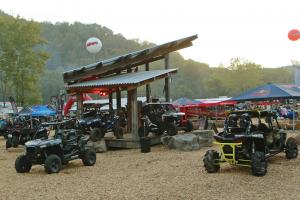 Erika and her crew sure know how to throw a party! Camp RZR at Brimstone has become kind of a Woodstock for ATV and Side x Side lovers. They’ve got the trails, the food, the music, and anything else you need right down to the bags of ice and a little Tylenol for the next morning. It was a well-organized, family oriented event and we can’t wait to try it again next year. Along with about 25,000 of our new friends.