We Ride the Trails from Moran
Written By:
John Arens 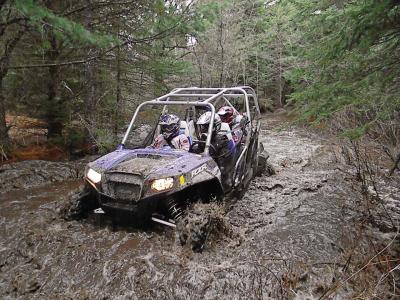 Katie Stelzer and Shaelynne Rocha are both outdoor loving girls. If there is a sport or an outside activity to try, you can count them in, and when the first trail ride of spring was announced for Michigan’s beautiful Upper Peninsula, they were more than ready to go. So were we along with about 100 other riders who made their way north for the first ever Moran Spring Ride.

Moran, Michigan is sleepy little town about 15 miles northwest of the Straits of Mackinaw. It’s the kind of place where nobody locks their doors or really has to, and one look up at the night sky reveals a light show with a million dazzling diamonds you can only see at this latitude. Like nearly every other northern town, its roots began with the timber industry and nearby sawmills sent lumber from pine, cedar, and hardwood forests south to build cities like Chicago, Detroit, and other parts of the Midwest. Huron and Ojibwa Native Americans, fur trappers, French Missionaries, the British, the Rail Roads, and finally German immigrants all played their part in the region’s history and even today you can find abandoned railroad grades, vast former quarries, and structures long past their bustling prime slowly settling into the woods as the forest reclaims the land, one pine cone at a time. Timber management still plays an important part in the region’s economy, but so does tourism. While the area has long been a snowmobiling Mecca in the winter, summer tourists find their way north to sleepy cottages scattered along side roads or on the shores of numerous small lakes. Meandering through the forest are seasonal logging roads, but they also work perfectly as trails for off-road and snowmobile lovers out to enjoy nature. 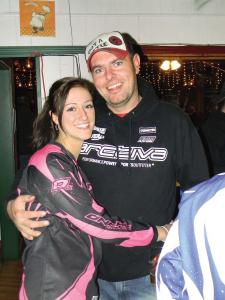 Bullwinkle’s Bar and Grill in Moran was the official base camp for our adventure, and both Katie and Shaelynne were bright-eyed and ready to go, with Shaelynne on her Honda Recon ES and Katie in a Can-Am Commander 1000XT. Riders unloaded their machines across the street, signed up inside the friendly establishment, and grabbed a trail map of the day’s rides which would end back at Bullwinkle’s with a great buffet dinner. You couldn’t beat it for the 10 dollar signup! Proceeds from the ride would cover prizes, dinner, and support summer trail grooming thanks to the Straits Area Snowmobile Club whose many members often trade skis for skid plates when the snow is gone. Everyone appreciates smooth trails.

The route for the ride was laid out by Wayne Davis of nearby Davis Motorsports. Wayne is a resident of Epoufette, Michigan but also a year round rider of all things from dirt bikes, to sleds, to ATVs, and he knows the local trail system well. To generate a little business for the community and to offer great riding for all, the route wound through several interesting areas and took riders through little towns such as Epoufette, Rexton, Trout Lake, the huge but long abandoned Fibron Quarry, down old railroad grades, past the Trout Lake waterfalls, and around many lakes and streams. Luckily the trail system in the U.P. is well established and marked, and for stream crossings, there are bridges capable of carrying any off road vehicle, including a full-sized groomer/tractor. This was spring, however, and riders would find water on the trail! 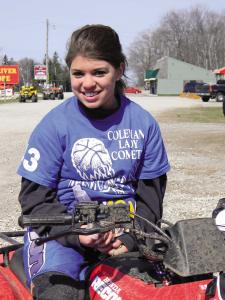 We’ve ridden many of the local trails in the area and usually they’re sandy and smooth with few waterholes. This was late spring, though, and there were even a few snow piles to be found. Streams and lakes were filled to the brim and many low areas in the trail contained water which made for extra fun. As fun as it is to wind through the pines on the trails, it was a blast to wade through sandy bottom mud holes, to play in the temporary ponds at the bottom of the rock quarry, and to watch other riders go in just a little too deep! Every time Katie would venture into the water, you could hear a giggle from her helmet. It was a great ride for all!

Back to the Buffet!

We love riding the trails anywhere, and rallies, poker runs, and festivals are always fun. Often times they are a cross between an outdoor show and a mobile, trail roving party; the Moran Spring Ride lived up to our expectations and then some. At the end of the day, riders crowded back in Bullwinkle’s for the prize giveaway and a great tasting dinner. We can’t wait to go back for their next ride -neither can Shaelynne and Katie!