Tearing Up the Dunes on the New Polaris RZR
Written By:
John Arens 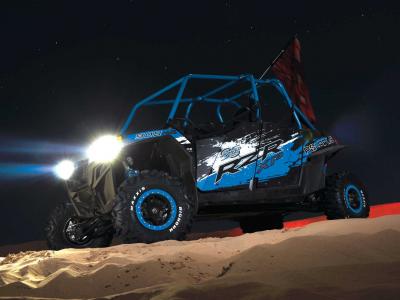 As fellow test rider and editor Pete Bengel and I cruised across the Glamis dunes in Polaris’ new  Jagged X Edition RZR XP 900, all I could think was, “This vehicle makes me laugh.”  It’s not that the Jagged X RZR is crude, underpowered, or incapable; far from it.  What had me laughing in my helmet was that it is ridiculously fun!

Designing the new Jagged X RZR was easy for Polaris. They pulled out their big playbook and went with the old “Give the customer what they want” play.  What they want is always the same: more power, more suspension, more features, and more fun and that's exactly what Polaris delivered.

Inspiration for the Jagged-X came from what some racers and recreational riders were already doing with their four-seat XP-4 900; which is taking the two rear seats out, lengthening the suspension, and adding more power with a different exhaust.  Polaris made it easy though and took things one step further with a host of upgrades already installed from the factory.  The RZR XP 900 H.O.Jagged X Edition includes: 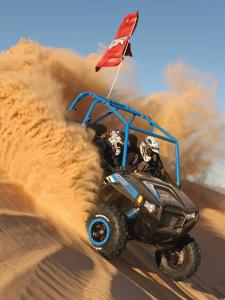 The premium features of the Jagged X RZR make it a great choice for desert or dune action and Polaris had just the place to introduce it.  New Year’s is traditionally a huge weekend for riders at the Glamis dunes, and Polaris was in the mood to throw a party.

Keeping the Jagged X RZR a secret was going to be almost impossible.  Rather than try to hide their newest creation, Polaris chose to set up a HUGE camp at the Glamis dunes and invite everyone to stop by.  Riders of all types and all brands were greeted with product displays from GoPro, Traxxas, FOX, ProLine Wraps, Holz Racing, Jagged X, the American Sand Association, Ride Now PowerSports, Walker Evans Racing, High Lifter Products and Polaris Defense.  As expected, they also had plenty of RZRs on display and factory staff to answer any questions.  Several vendors had product giveaways, and guests were treated to as many hot dogs as they could down at the carnival like atmosphere.

Both the media and the public were getting a first look at the new Jagged X RZR XP 900, but we also had a few days to play with it in the largest sand box in the country. 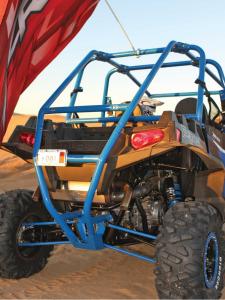 Climbing into the Jagged-X Edition RZR 900 is unlike any other model in the Polaris lineup.  Rather than side nets, the Jagged-X RZR comes with a set of doors right from the factory, although the top of the door does feature a short net as an extra precaution.  Most of the door is constructed of lightweight aluminum tubing but the frame, hinges, and latch are made from steel for durability and security.  Rubber dampeners keep vibration to a minimum.  The latch mechanism works smoothly and catches easily upon closing, but just as importantly, the release handle is at mid-point in the door. Squeeze the handle, the mechanism releases, and it’s easy to get in or out.  Nice job!  Polaris also hid part of the mechanism with a small panel not only to protect the latch mechanism but to keep the driver and passenger’s shoulders from bumping into it.  It’s a well thought out system that works.

Once inside the Jagged-X RZR, it’s easy to settle down into the PRP racing seats.  The seats are very comfortable with excellent support for your legs and sides, and they make you feel very secure.  Although the seats are ready for a five point harness, Polaris knew most buyers would rather have the simplicity of a standard three point belt system, and unless you’re really into extreme driving, the standard belt gets the job done.  Taller riders will love the extra leg room from the sliding driver’s seat which gets you up to four inches of added clearance.  The passenger’s seat is fixed, but that has been moved back slightly as well.  It makes a difference you can feel.  All other controls and features are identical to other RZR models.

One of the toughest environments for off-road vehicles is the sand dunes.  While the chassis often has an easy time in soft sand, the engine generally has to work much harder moving the vehicle through the dunes.  Throw in huge hill climbs and elevated temperatures and you’ve got a whole new level of performance required from your engine, and everything from the transmission, through the clutch, and even the oil faces a long day of hauling your pizza bloated hide up and down the huge hills.  The bottom line is sand robs power.  Again taking the cue from the aftermarket, to make up for any loss, Polaris gave the Jagged-X RZR a healthy dose of instant adrenaline.

We like the existing XP 900 engine but to bump up performance the new 900 H.O. motor gets a different head with stiffer springs and new intake camshaft profiles.  Polaris modified the ECU with more aggressive mapping, and a stainless steel exhaust with dual outlets gives a throaty, ready for action sound.  It’s slightly louder than stock thanks to the free-flowing design and lets you know it’s ready for action, but it’s definitely not obnoxious.  For those who already own a RZR with the standard XP 900 engine, Polaris is also selling the heads and the exhaust system as an accessory.  To transfer the new-found power to the ground, Polaris relied on their old friends at Team Industries who have decades of experience in building high-performance clutches, and the solution for the H.O. motor was a new clutch ramp profile and different weights. 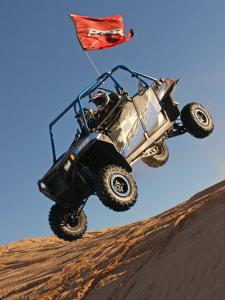 A big part of the RZR XP 900 H.O. Jagged-X package is the upgrade to the chassis.  Besides the removal of the rear seats and the striking color scheme, the most noticeable difference is the redesigned roll cage.  Without the rear seats, Polaris was able to drop the overall height of the structure, and at the rear it swoops down to the rear cargo deck, eventually tying into the lower frame rails at the rear of the chassis.  This not only makes it look cool, but by triangulating in the chassis tube structure, it makes the chassis much more rigid and durable.

While they were painting the chassis Voodoo Blue, Polaris also decided to paint the shock springs the same color.  More importantly though, they replaced the stock shocks (which we really liked) with racing inspired, 2.5” body Walker Evans shocks featuring full compression and rebound adjustability.  The Walker Evans shocks really let you dial in the suspension for the terrain and your driving style.  Polaris also painted the beadlock wheels to match the blue color scheme as well.

With an open area where the rear seats used to reside, Polaris made the most of the open space with dual, lockable storage boxes.  Both boxes are large enough to hold plenty of gear, but they also have a good seal and they do a great job of keeping out grit, dust, and water from the trail.

Any day where the only thing on the schedule is play riding is a great day and as the sun peaked over the dunes, we rolled out of our camper and into our riding gear.  After a brief meeting with the Polaris staff, we loaded up a Jagged-X RZR 900 of our own and headed out to conquer Glamis. 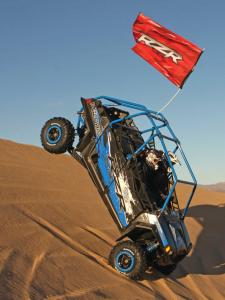 We’ve put considerable time in the four-seat RZR XP 900 and the Jagged-X RZR provided a very  familiar feel as we darted between the desert scrub, up and down small hills, and across whoop sections for the first few miles in the sand.   With its longer wheel base, the four-seat chassis smooths out the terrain and Electronic Power Steering insures your arms never tire.  It was already a great day and we weren’t even to the big dunes yet!   All of the Polaris RZR models are quick and it didn’t take us long to reach the base of the big hills.  As we rolled to the bottom of the first huge dune, Pete pointed the Jagged-X RZR skyward and mashed the throttle to the floor.

The new high-output motor and clutch of the Jagged-X edition RZR responds instantly to throttle input and the extra power definitely helps you attack even the largest dunes with confidence.  It feels like the power loss from sand riding is gained back by the new motor and then some.  We like it!  We also never had a hint of a slipping belt and the clutch made backshifts quickly as well.  The Maxxis Bighorn tires do a good job in the sand and there is really no reason to run paddles.

The 900 H.O. Jagged-X engine definitely offers a performance advantage over the stock motor and the suspension is equally impressive.  Pin the throttle to the floor and hang on!  It was a blast to leave the power on and skip across the top of the whoops.  The Jagged-X RZR held its line perfectly with no swapping, and every bit of force was soaked up by the suspension.  To really get an idea of what the suspension is capable of though, you need to air it out and there is no better place to find a big jump than in the dunes.  Watching a 1500+ machine with two riders rocket up a huge dune, launch towards the stratosphere, and then float far down the back side time and time again is highly impressive and the Jagged-X RZR makes even the scariest huge leap look easy.

The RZR XP 900 H.O. Jagged-X Edition is an impressive machine in the dunes and desert.  The price is steep, but the package Polaris put together is cheaper than piecing it together yourself and the performance is outstanding.  Next time we’ll take one on a Glamis adventure ride all the way to the Mexican border, smiling all the way.