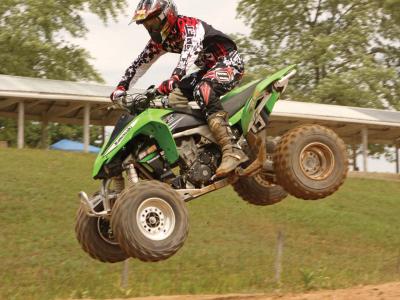 Maybe you’ve heard of the expression, “the whole is greater than the sum.” That’s the theory of synergy. It’s the idea that if you combine two or more components, the potential of their cooperation together is higher than that of their individual potential. One of my earliest personal experiences with synergy was around the age of 12 and involved two full boxes of those old red “caps” for toy cap guns, a brick, and a sledgehammer. Long story short… the brick disintegrated, and my ears finally quit ringing last week.

If we had to pick an example of synergy as it relates to sport ATVs, it would probably be the Kawasaki KFX450R. Here’s why: If you’re looking through the specs for the Kawasaki 450R, there isn’t much that really stands out over and above other sport ATVs. It doesn’t boast class-leading horsepower, nor does it top the charts in suspension travel. In fact, if you compare numbers with the current offerings in the 450cc sport class, the Kawasaki is average at best. But once the fire is lit and the wheels start rolling, all of those numbers start to work together and the KFX450R proves that the whole is better than any of the individual components! 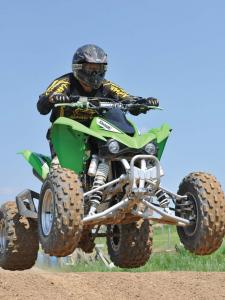 The cockpit of Kawasaki’s 450R is slightly small for riders topping the 6-foot mark, but still laid out well enough to move around easily, and the mounts for the Renthal handlebars can be turned around to offer taller riders about an inch of extra room. It’s nice and narrow between the knees for good grip and control, and transitions nice and smooth around the 2.6 gallon fuel tank. We never noticed any tendency for the plastic to snag the tops of our boots while moving around on the KFX. The seat drew mixed reviews from our test riders ranging from “it’s as hard as a rock!” to “it’s nice and firm and grippy.” Indeed the seat is very firm and if your backside is accustomed to a softer saddle, the KFX seat will probably feel like you’re sitting on a barn post. We, however, do like the fact that you don’t end up feeling the plastic seat base with your legs within a few laps. Aggressive sport quads need a firm seat and a dual-density foam would probably be a great addition to the 450R in the future. Wide serrated foot pegs keep your feet firmly planted and the plastic foot baskets are out of the way of your boots.

The controls on the Kawasaki are excellent. Both front and rear brakes are sufficiently powerful and very responsive to input, and the front lever is adjustable to your liking. Clutch pull is excellent and there is a quick-adjuster to dial it in just the way you want it. One of our pet peeves on some other sport quads is a poor thumb throttle, and the KFX450R definitely wins brownie points with us on theirs! This is one of the best thumb throttles in the industry! The lever is firm, the angle and tension is perfect, and it doesn’t grate the side off of your fingers while you ride! For many years we have been swapping out various OEM throttles with the Honda 450R housing, but there is no need to change out the Kawasaki throttle. It is excellent, but we have questioned the need for a throttle limiter screw on a 450cc sport ATV. We suppose it’s just a shared part with a more entry level model. Kawasaki also deserves praise for their reverse actuator lever, which is a small non-intrusive lever that you push with your right thumb when downshifting past first gear. It is incredibly easy to use in the heat of battle… much easier than having to pull a lever or turn a switch. All combined, the Kawasaki KFX450R’s controls make for one comfortable ATV. Synergy! While “comfort” may not be a term people like to hear so much when describing a high-performance sport ATV, it is well worth noting that not one of our test riders complained about arm pump during testing. Not much will kill your lap times or riding ability faster than having your arms turn rock hard. 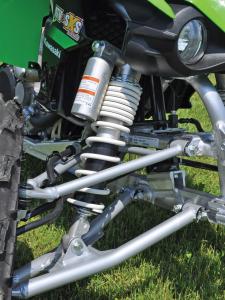 Stock ATVs always leave a lot of room for improvement in the suspension department, and the KFX is no exception to that rule, however, the Kawasaki does surprisingly well given its limited travel measurements. The piggyback preload, compression and rebound adjustable front shocks combined with the rear piggybacks preload, high and low speed compression, and rebound adjustments can suit a wide variety of terrain. They do a great job at sucking up big bumps but lack the plushness of the longer, higher volume shocks being used by many of the competitors. Still, considering the relative shortcomings of the shocks, the KFX handles well thanks to a relatively long cast aluminum swingarm, long gullwing lower a-arms, and narrow-front aluminum perimeter chassis.

Our biggest complaint about the handling is that the Kawasaki has a rather short caster angle. This makes the front end of the 450R turn at will, but it can get a bit twitchy when you put your weight on the front end. A steering damper would likely help with this problem, but the real fix is to increase the caster angle with a set of adjustable upper a-arms. At times, we also wished for a tighter turning radius, but the KFX was, for the most part, plenty maneuverable and agile even in tight woods situations.

At the heart of the KFX450R is a 449cc DOHC thumper with four titanium valves, all fed by 32-bit digital electronic fuel injection through a 42mm Keihin throttle body. The Keihin EFI also features a handy “choke” style knob tucked neatly behind the left frame rail that can enrich the mixture for cold starts and also adjust the idle speed. As we mentioned earlier, the Kawasaki doesn’t top the horsepower charts in the 450cc class, but it does put out very responsive and potent power all the way up to its peak output at around 7500RPM. The engine can and will rev well past that point if you need to stretch a gear a little longer, but you quickly learn that the best way to make time is to grab another gear. 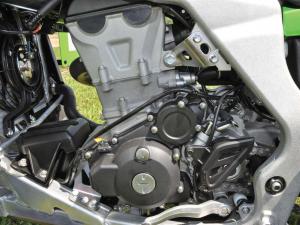 The Kawasaki’s lack of top end horsepower undoubtedly comes from the monstrosity of an air intake tube, which was obviously obtained through a 5-finger discount from the Polaris Outlaw S design room. That’s the wrong place to go looking for air intake help. The KFX has a decent airbox and filter, but it’s connected to the throttle body by the second worst system in the industry. Guys… send this one back to the drawing board!

Each gear in the 5-speed transmission seems well spaced and the KFX doesn’t seem to have any gears that cause it to fall on its face. In fact, we think the engine has plenty of grunt to pull a taller secondary gearing which would help to stretch out those shifts a bit farther and increase the top speed too. Of course… if top speed is your thing, just use reverse gear a lot. It’s incredibly fast in reverse, even faster than some other quads in second gear.

Starting the Kawasaki is easy whether the engine is hot or cold. We have ridden many sport ATVs that require a little finesse and maybe a prayer or two if you stall them when they’re hot, but the KFX450R fires up with no problem.

Obviously, someone at Kawasaki has, like us, spent way too much time “race” trimming fenders with a box cutter knife or a reciprocating saw. We even watched a friend get a little carried away one day while trimming his fenders. (Hey… where is this gas coming from?!?!?!) To save us all the grief and razor cuts, Kawasaki has outfitted the 450R with sweet removable outer fenders that leave the inner fenders at a convenient width for racing and also enable you to replace your scuffed outer fenders separately from the inners. It’s a great feature! 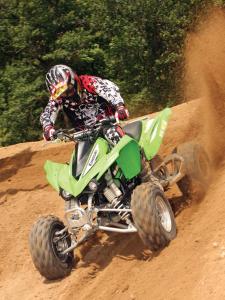 If night riding is your thing, the 30w dual headlights do a great job at lighting up the way, and the LED tail/brake light keeps you from being a victim of what some refer to as the dreaded “Rock Hudson.” The front and rear lighting is also easily removable if you want to take your KFX to the race track.

Speaking of the race track, isn’t it about time for a short rant about another pet peeve of ours? Now suppose… just suppose… someone actually wants to take a high-performance ATV out and race it. In addition to various safety items that are mandatory for racing, every single ATV on the starting line has to be equipped with legible numbers. Not to bash Kawasaki alone, as various other manufacturers obviously missed the memo also, but why in the world doesn’t any hi-performance ATV have a number plate large enough for decent looking, legal race numbers? Just sayin’!

When it is all said and done, we feel that the 2011 KFX450R has indeed reached synergy. The combination of quality features and components have created an ATV that we really love to ride. It is a nearly perfect trail weapon, and we have even raced it at a local XC race (won our class) and finished in the money at a local motocross… all in completely stock form and competing against ATVs in varying degrees of modification.
In a future issue, we’ll be doing some simple bolt-on mods to our KFX to see if we can make it more competitive on the motocross track… all on a modest budget. Stay tuned, and we’ll show you how to make your Green a little more mean!