Trail & Race Tested - A Checkered Past

A Year in the Saddle of the Polaris Scrambler XP 1000
Written By:
Holeshot Ace, Pete Bengel 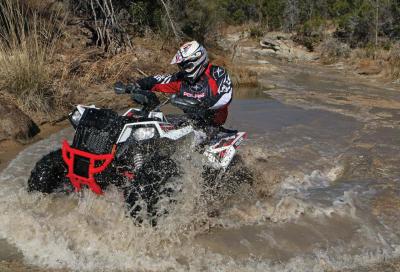 I’ve often questioned the logic in large displacement ATVs - especially ones close to or north of 700lbs. on the scale.  Yeah, we all like to have bragging rights when it comes to having the most horsepower, but when does it just become too much of a good thing?  When Polaris released their Scrambler 1000, it was no exception to those thoughts.  And even though initial ride impressions were that it was extremely nimble and forgiving for a one-liter titan of an ATV, it was still a heavy, extremely fast monster.  After a year of quality seat time on the Scrambler 1k, some of my opinions have changed somewhat and others have been reaffirmed.  But to be honest, it wasn’t until my last ride on the Scrambler that I truly came to understand this machine’s capabilities and place in the ATV hierarchy.

At the end of the District 14 ATV XC series, I got the bright idea to race our Scrambler XP 1000 White Lightning edition in the season finale at Portland Trail Riders in Portland, MI.  It wasn’t so much my initial thought to race the Scrambler, but I’d convinced my good friend Bill Arens to enter the race also.  Since Bill hadn’t raced in around 15 years, I thought he’d do well on the Honda 450R that I’d initially planned on racing since it would be similar to his last race machine, the Honda 250R.  That left the Scrambler as my only feasible choice for a race mount.  So I fashioned some ultra-sweet numbers out of electrical and duct tape, covered up the headlights, and headed to the races. 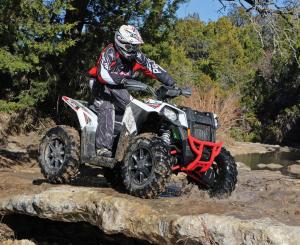 As I sat in the third row on the starting line surrounded by nothing but pure-sport ATVs and my friend Chad on a Kawasaki V-force 700, I kept thinking to myself that I should probably have my head examined for signing up on a machine that weighs almost twice what everyone else in my class (35+) is riding.  And I wasn’t sure what to think when one of the B class riders on the row in front of me laughingly mentioned to his buddy that, “I’ll probably be pretty slow, but if one of ‘those guys’ passes me, I’ll probably just quit the sport.”  For the first time since I began racing, I was actually kind of nervous.  But as the first two rows of ATVs fired up and blasted off the line, I kept myself in check by reminding myself that I’m just out here to ride around and have a good time.  And that’s when s**t got real.

As the starter whipped his flag up into the air, I squeezed the brake and turned the key, and the Polaris’ 1000cc of fuel-injected four stroke fury came un-stinkin’-glued!  Before I knew it, I was cruising into the first corner with nothing but clear track in front of me.  My thoughts instantly turned from nervousness to excitement with the idea that I just pulled the holeshot on what amounts to a stripped-down utility ATV with nice shocks.  Reality soon set in though, as the Honda 450R of my friend Larry Seeley was hot on my rear bumper after a few sections of jumps, corners and straights.   Holding Larry up wouldn’t be fair, so I let him by with the idea that if I could hold on to 2nd in my class, I’d be pretty satisfied.

Larry slowly pulled away, but I did my best to keep him in sight as we picked our way through riders from the rows in front of us.  If you’ve ever raced before, you’re probably familiar with the look-back that you get from a rider as you come up behind them to pass.  I LOL’ed under my helmet as they’d give me a quick glance, look back forward, and then whip their head back around with the look of, “Where did that JEEP come from?” in their eyes!  One by one I picked them off as my 87hp V-twin monster rocketed me through the ruts, roots, rocks, mud, and bottomless sand of the Portland track to the next unsuspecting racer. 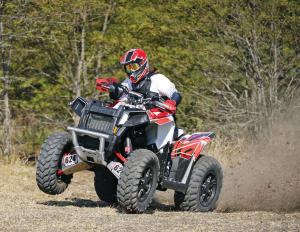 As I settled into an aggressive but sustainable pace, I began to put together a race strategy, something I quite honestly hadn’t thought about prior to pulling the holeshot.  I was finding out that the surprising performance of my Polaris would back me up in any situation as long as I didn’t get stupid, and there were two things that could stop this train from rollin’.  One was to roll a tire off the bead - I didn’t have beadlocks, and the other was to end up underneath the quad, the latter of the two actually coming partially to fruition after a slight miscue in the “euro” section.  As I concentrated more on riding smooth and smart, I passed unsuspecting riders with increased frequency until I began to see letters on number plates from the first row on the starting line.   And then… there was Larry!  As we approached the half-way point, Larry’s clutch started slipping and he couldn’t keep up his pace.  I could read the disappointment in his eyes as he was forced to let me by, but perhaps also being happy that I was carrying our senior-class assault to the front line!

Pleasantly surprised and satisfied that my trusty Polaris would likely be rewarding me with a class win, I pushed through the final laps, concentrating on being smooth, smart, and consistent and thrilled that the digital readout at scoring continued to read “#111, 1st place” as I passed through.  But as the checkered flag waved on the final lap, the updated message really blew my mind, “6th Overall!” 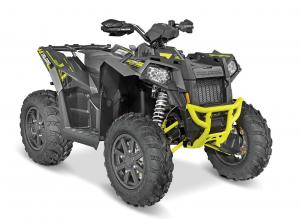 As I took off my goggles and slowly rolled through the pits and back to the truck, thrilled about my finish, my adrenaline began to fade and I started to realize that I hadn’t been giving the 1000cc Scrambler enough credit.  Hidden behind those big, full fenders, foot boards, and even a modest rack, is a massive amount of performance - performance above and beyond what most people would expect out of a big, robust, four-wheel-drive beast of an ATV.  My overall opinion of the Scrambler 1000 hadn’t necessarily been changed, as it was always favorable.  Instead, it had been validated.

Things I’ve learned in a year aboard the Scramber XP 1000:

*It NEVER runs out of power!  Seriously… the power is just always “there”.  The Polaris ProStar Engine is extremely potent yet incredibly well-mannered, and the clutching transmits that performance to the wheels extremely effectively.

*It’s damned near impossible to stall.  In fact, when it’s on its side and your leg is stuck under it, it’ll stay running until you reach up and shut off the kill switch.  I know, dude, from experience!  (Yes, I said that in my best Chris Farley voice)  Take my word on this… I wouldn’t recommend trying it first hand. 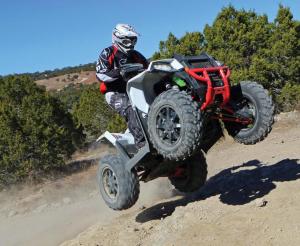 *It handles incredibly well!  There are actually sport ATVs on the market that don’t handle this well!

*The Polaris EPS (Electronic Power Steering) is arguably the best in the industry with a perfect balance of assist and feedback resistance.  After an hour and a half in the rocks, ruts, and roots, my arms still felt great!  The EPS isolated my body from the abuse of the terrain and kept my wheels aiming exactly where I wanted them!

*The Fox Podium X fully adjustable shocks are downright impressive.  Keeping bumps under control while facilitating the delivery of 87hp through the wheels and into the ground is no simple task, but the Fox shocks do it with ease.

*It can make you look good!   If you respect it and use its performance wisely and responsibly, it will reward you with the ride of your life.

*If you’re on a smaller, lighter ATV and a Polaris Scrambler XP 1000 passes you… Don’t take it personally! 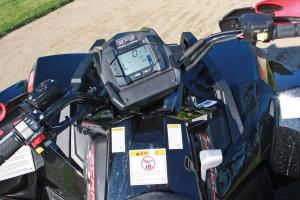 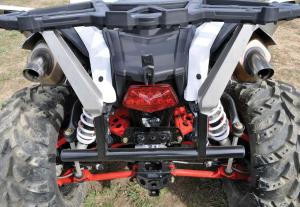 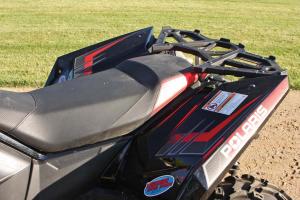 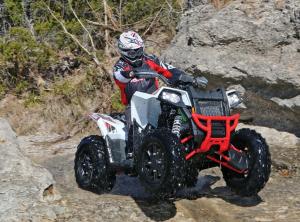