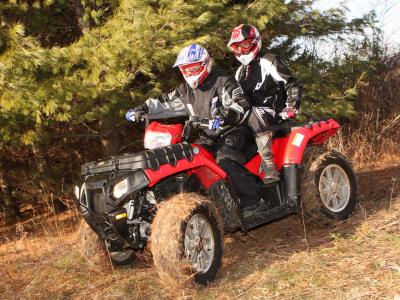 We’ll admit that the first time we headed out onto the trail riding double on an ATV was a little strange. For years we had been one of the guardians of safe ATVing, and riding with a passenger was one of the Cardinal Sins, sure to lead to destruction and damnation. The trouble was, since the first ATV rolled into the first ride area, undoubtedly a friend, buddy, or girlfriend wanted to ride along regardless of the lack of seat, foot pegs, or handholds. Despite all manner of warnings, threats, and pleading, people were continuing the practice, and a few aftermarket companies even began to provide secondary seating! All manufacturers noticed the trend, but Polaris was the first with the cajones to build an ATV specifically for two. Today they’ve got several models designed for riding with a buddy, and recently we tried the latest generation Sportsman Touring 850 EPS.

The Sportsman Touring EPS is designed first and foremost for trail comfort. Polaris has known for many years it’s all about the ride, and they start with an excellent chassis platform. When Polaris went to the XP chassis a couple years ago, it was a dramatic change of course for them, and the entire ATV was refined. We actually liked the previous chassis and always gave it high marks for ride quality, but we can’t say enough about the current XP platform. On the trail, it’s dreamy smooth thanks to its dual front A-arms, optimized Independent Rear Suspension design (which Polaris calls “Rolled IRS”), and shock settings. A big part of the improved suspension must be credited to the tire and wheel selection, and good looking, tough, 14” cast aluminum wheels are fitted with specially designed tires which we feel are the best OEM ATV tire on the market. They perform very well on the trail and provide a smooth, controlled ride while grabbing traction. When riding aggressively, the tires don’t exhibit much sidewall roll, but they also work very, very well in mud where they clean out quickly. About the only drawback to the Polaris tires is they are a slightly softer compound, and you’ll wear them out a little sooner. We can live with that for the other traits they exhibit. As for the rest of the chassis, the current Sportsman Touring models (550 and 850) are based on the XP platform, but it has been stretched 6 inches for the additional rider. The longer wheelbase makes the ride even smoother. 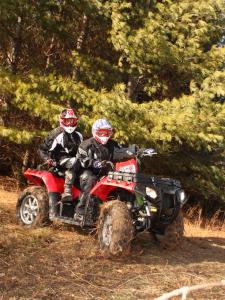 Power has never been a problem on any of the Sportsman Touring models, and the Touring 850 EPS has MORE than enough power to take you, a passenger, and tons of gear anywhere. The 850cc SOHC, liquid cooled, twin cylinder, EFI engine cranks out a claimed 71 hp, and we believe them! In many ways, nobody needs a 71 hp engine in a 2-up ATV, but we’ve always been in the camp that believes too much power is just enough, and possibly when using the ATV for work duty the extra horsepower could come in handy. Thanks to EFI, the engine always starts and runs beautifully, and we’ve found it to be extremely smooth. While the exhaust note is throaty and hints at the power inside, it’s still quiet enough that it won’t offend others on the trail. Fuel is sipped from the tank between the driver’s legs, and we’re happy to report maintenance is easy on the 850. One unique feature on all the XP style ATVs is an engine that is mounted longitudinally or “sideways” in the chassis. The advantage is better power delivery as the drive shafts protrude straight out the front and back of the engine. A second major advantage is greatly increased belt life as the CVT cases are cast with the engine, greatly reducing any flex or misalignment.

Polaris likes to commonize parts wherever possible between their different models, thereby making it more efficient for manufacturing and for dealer parts stocking. Both the air filter and oil filter are standard Polaris parts your dealer will have on hand. Changing the simple spin-off oil filter is a breeze, and an excellent, large, handy dipstick is found on the side of the engine. The air filter is located in a compartment under the seat and can be removed with no tools. Once removed the simple cartridge style filter can either be gently cleaned or replaced. We’ve never had a problem with either, and it’s easy to maintain the 850 and keep it on the trail. 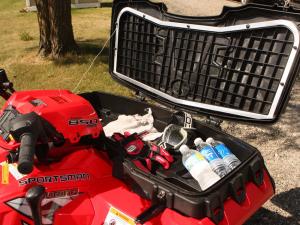 If you’ve driven a Polaris Sportsman from the last 10 years you’ll be at home on the Touring models, but you’ll love the ergonomics of the XP style chassis even more. Ahead of your right knee is the familiar gear selection lever (P, N, R, L, H) with all other controls at your finger tips. We really appreciate the new style thumb throttle housing, especially whenever we ride one with the old housing which often grated a hole in your glove and finger. Polaris also gave the Sportsman Touring models their Active Descent Control system which really helps when driving down a steep hill. The ADC system transfers engine braking to all four wheels, and all the driver needs to do is take their thumb off the throttle and the ATV will descend the hill at a slow walking pace. We’ve tried it and it works great! At the center of the steering column are the key, a 12 volt accessory outlet, and a new combination dial and digital gauge package that gives a retro look but with plenty of important info on the digital display. Below the driver’s feet area is an excellent set of floorboards with a nice, grippy, raised peg area, and with the engine mounted sideways in the chassis, Polaris was able to reduce the distance between the driver’s feet and knees by over three inches. The result is all of the new XP style ATVs are extremely comfortable to sit on.

As we stated earlier, it’s all about the ride and that goes for the passenger as well. On the Touring models, the passenger is treated to plenty of comfort from their own set of grippy foot rests, vibration absorbing hand holds, cup holders that even have a rubber strap designed to hold down their a beverage while underway, but most importantly their own seat. The seat is specially formed to hold the passenger in place and provide a feeling of comfort and security, and is raised slightly higher than the driver’s seat for a better view of the trail ahead. Polaris also allowed ample distance between the two riders to avoid banging their helmeted heads together should the trail get rough. The passenger’s seat has one other unique feature and it actually comes with its own shock absorber! As if the ride wasn’t smooth enough on the Touring models, the passenger can now dial in their own suspension, the only danger being they may become so comfy they could doze off! For adjustments the seat can be removed, or it can even be replaced with a tough storage box that doubles as additional rack surface for hauling loads on work duty. At the front of the ATV is one of our favorite Polaris features: the sturdy, sealed storage area that is big enough for plenty of gear, tie downs, tools, etc. We can never have too much storage on an ATV, especially for long trail rides or overnight adventures. 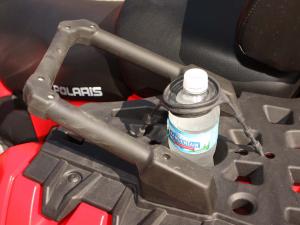 Two-Up on the Trail

Testing for us is more than a cruise around the back yard, and we try to get as many miles as possible on any new vehicle, in different terrain and with many different riders. Since the Sportsman Touring 850 EPS is designed primarily for cruising the trails, we spent a long summer doing exactly that and prowling around the north woods.

Regardless of the conditions, the Sportsman Touring 850 EPS has plenty of power! Nobody came back asking for another 50cc’s, and we love the sound from the XP engine which runs extremely smooth at any temperature or elevation thanks to EFI. With all the power at your right thumb, we’re very glad and a little relieved to report the handling is very predictable either with a single rider or with a passenger. Electronic Power Steering makes handling even easier and it was easy to put the big Polaris where you wanted to be on the trail, and it would hold its line even at high speeds. Ride quality is extremely smooth and the suspension soaks up trail chatter and bumps easily, and the extra length doesn’t seem to increase turning radius adversely. Night riding is another experience altogether, and we like how two of the Polaris lights illuminate the trail while the center mounted light pivots with the handlebars. We can’t say enough about the ergonomics on the Polaris; it’s comfortable for both the driver and passenger! About our only complaint is sometimes the passenger seat feels as if the inner seat backing is too springy and can possibly lean back a little too far. We would prefer a back rest that was slightly stiffer.

Riding double for the first time can be a little unnerving, almost like somebody is watching over your shoulder. Every so often we would take a peek back and be startled to find another rider, almost like when you suddenly notice somebody tailgating you on the highway. When it was our turn in the back seat, it was a little strange heading out onto the trail with somebody else’s hands on the bars, but within a couple miles we really began to enjoy the experience. It was very relaxing to take in the scenery and have a conversation with another person as we cruised along! After so many years of riding alone with our thoughts safely contained inside our own helmet, suddenly the experience of riding with another person, and carrying on a conversation while exploring every turn of the trail, was another aspect of ATVing we thoroughly enjoyed. Since then some of the most memorable and fun trail rides have been with another person, either as the driver or passenger. We really like it, and the Polaris Sportsman Touring 850 EPS makes it easy.

We’ll always love aggressively attacking any new trail on our own machine, and we never really understood why anyone would want to ride double aboard their ATV. That changed the first time we tried it! Models like the Polaris Sportsman Touring 850 EPS make it a blast to ride the trails and explore together with the perfect combination of power, handling, and trail comfort. Grab your significant other and venture into the woods together with one; you’ll both love it!