TRAIL CRUISER for the WHOLE CLAN
Written By:
John Arens

We were more than a little surprised when Yamaha called with an opportunity to ride the new Wolverine X4.  The Wolverine R Spec hadn’t been out long and hardly needed replacing, yet Yamaha was definitely covering their bases by adding a 4-seat Wolverine to their stable.  With most manufacturers this usually means a stretched and somewhat compromised chassis with a couple more seats, a school-bus long wheelbase, and less bed room.  Not this time!  What showed up was an entirely new machine.

Yamahas design goals for the new Wolverine X4 was for it to be nimble, versatile, and comfortable.   Those are almost the same attributes that could be applied to the Wolverine R-Spec, but meeting those goals can get a little tricky in a four seat frame.

Four seat machines usually excel at hauling passengers, but they can get very long, and that means an enormous turning radius.  You can kiss any hopes for nimble handling goodbye when the wheelbase gets longer.  The solution is to just shorten the rear cargo area, but with that comes another major drawback as the total load carrying capability is rapidly reduced.  The engineers and product planners at Yamaha were unwilling to concede in either area.  It would take an all-new platform to reach their goals. 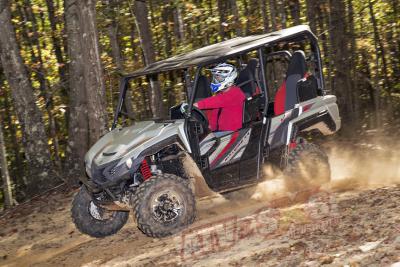 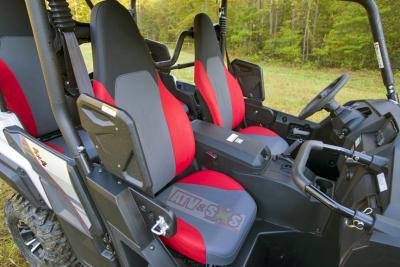 UNDER THE SKIN:  CHASSIS, ENGINE , and POWERTRAIN

Just like with the FedEx people, it’s all about the packaging.  In vehicle design that means how you fit in the engine, suspension, cab area and features, and how it all works together.  That’s a lot of stuff to pack into one trail legal platform, but Yamaha engineers came up with a new chassis design that works!.

The Wolverine X4 main chassis is built from high strength steel with independent A-arm style suspension at each corner.  Suspension travel is just a tick under 9 inches at both ends, and with almost 11 inches of ground clearance it certainly has the numbers to be a great trail performer, but the suspension does something interesting.  The Wolverine X4 comes with self-leveling shocks at the rear.

Side x Sides are notoriously difficulty to tune a suspension for thanks to the widely varying loads they often carry.  Sometimes it’s extra gear, extra passengers, or none of the above, yet the shocks must provide a smooth ride in any situation.  Self-leveling shocks were the answer.

Self-leveling shocks are typically found in vehicles that carry widely varying loads on the rear axle.  Polaris used them on their HD Ranger a few years back, and Honda has as well with their Pioneer so they are not completely new to Side x Sides, but they are uncommon.  The way they work is, thanks to internal ports they vary the amount of suspension support based on the amount of compression.  By adding load you compress the shock, and when you begin driving that motion basically pumps fluid into internal reservoirs thanks to the ports.  When everyone gets out or the load is removed, a lower internal port is then exposed, fluid drains back to a lower level, and the shocks return to the normal ride height and setting.  It’s a clever feature and great for a Side x Side.  No doubt Yamaha spent a lot of time and cash developing this feature, but it makes a better Wolverine.

The suspension isn’t the only area Yamaha got creative.  They also developed a new engine specifically for the Wolverine X4, and it looks surprisingly familiar.  Yamaha changed ATV racing with their high performance 4stroke engines and the engine for the Wolverine X4 is clearly a member of the family, although it comes with an extra cylinder.  The new engine is an 847cc, liquid-cooled, parallel twin fed by EFI.  Interestingly, the cylinders are not centered over the crankshaft center axis.   The cylinders are placed slightly behind the crankshaft, allowing for a shorter rod, and overall shorter, more compact engine.  (Remember the packaging constraints?)  Despite the overall shorter rod length, the offset cylinder still allows for a decent stroke length, and the engine puts out very good power, which was designed for the torque requirements of a Side x Side.  It also features a “drive by wire” throttle system that delivers instant acceleration, but also is very controllable when creeping between tight trees or over obstacles.  The overall position of the engine is slightly lower in the frame, again to save space, but also to lower the overall center of gravity and improve handling.  Finally, oversized rubber engine mounts keep any vibration isolated from the chassis.

Mated to the new engine is Yamaha’s beloved Ultramatic CVT transmission.  This transmission never lets us down.  In fact, we don’t know anybody who has even changed a belt on the Ultramatic system, and during our ride, whether we were in low gear, high gear, or climbing over obstacles we never once heard the dreaded chirp from a slipping belt.  Shifts between gears are very smooth, and the engine braking is very, very effective.   It will all but stop the vehicle even when descending a slope, at least with two riders aboard.  When fully loaded or pulling a heavy trailer you might need to touch the brake pedal, but in our test we actually needed a little throttle to get down the slope.  Yamaha also built in one other feature for controlling speed; the Wolverine X4 also comes with a speed limiting key.

Under the front hood you will find a second key and switch.  What it does is gives you full engine power in either position, but in the limited position top speed is limited to 25mph.  Normally the Wolverine X4 will cruise along just over 50mph. 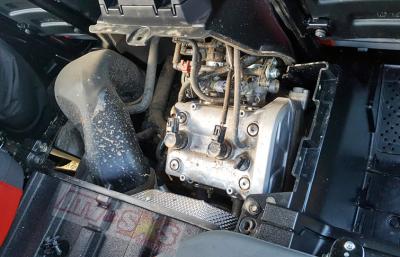 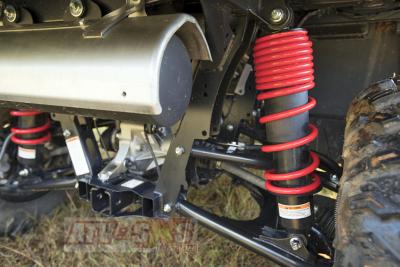 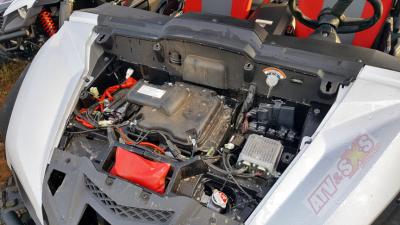 Side x Side cab design has come a long way in the past decade and they are much more comfortable with more features and better control layout than ever.  The cab area on the X4 is very well designed for both the driver and all passengers.

We like how Yamaha considered driver sight lines with the X4.  It’s easy to peer over the hood and you get a good view of the trail ahead.  All the controls are placed within reach, and a large, easy to read digital display is found at the dash center.  A medium sized wheel with a textured surface feels perfect in your hands, and the foot pedals are at comfortable angles down below, with good room for your feet.  It’s a comfortable machine to drive!

Keeping everyone safe inside is a nice set of doors, and Yamaha placed the latch mechanism on the inside, which helps keep it free from dirt and grit.  Just ahead of the front seat passenger is a padded grab handle, and the large glove box which Yamaha claims will never come open on the trail.  (Take note Polaris – Never Come Open On Trail).  Best of all, the Wolverine X4 gets a new seat belt that is supremely comfortable.  It might not sound like a big deal, but after you’ve had a poorly designed system gnawing at your neck all day or binding around your chest at every bump like you’ve inadvertently picked up a Boa Constrictor, Yamaha’s new seat belt system is positively luxurious.  Large, well-padded seats complete the comfort package, even for the passengers in the back.

The Wolverine X4 isn’t the first machine to have an adjustable rear seat system.  Honda flips theirs down under the bed,  Kawasaki uses a sliding mechanism with their MulePro, and the Wolverine X4 now has rear seats that can be moved to create additional bed space as well.  Yamaha managed this through a track system.  The thing is, this is the most comfortable folding seat system yet.  Sitting in the rear of the Wolverine X4 isn’t much different than sitting in the front.  The seats are very comfortable, you have a pair of center mounted cup holders, the foot rests are angled for better ankle support and comfort, and the only difference is slightly less room for the center mounted engine, which you never really notice since it doesn’t seem to channel heat into the rear passenger area.  It’s not a bad place to ride!  We consider the interior of the Wolverine X4 to be a great example of excellence in design!  They thought of all the minor details. 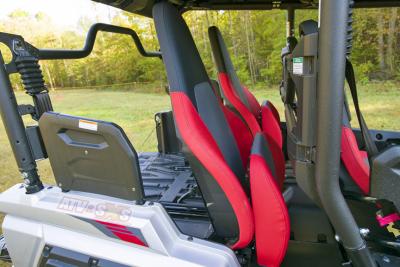 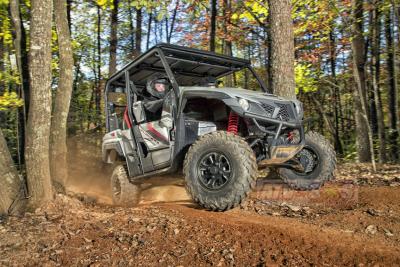 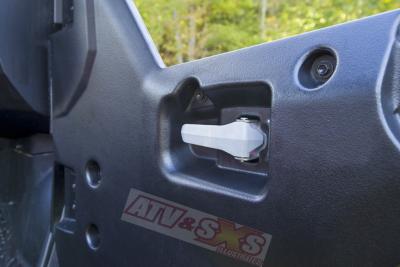 Cruising down the trails in the Wolverine X4 we were reminded of Yamaha’s design goals.  Nimble.  Versatile.  Comfortable.  The X4 certainly was comfortable, but we would also add QUIET to it’s list of virtues.  It’s impressively quiet, and you can easily carry on a conversation while cruising along.  Yamaha did a great job of shielding the cab from unwanted clatter and also heat, and the only time we heard an unfamiliar noise was on hard packed surfaces, not from the engine, but it was the Maxxis tires humming down the trail.  At any speed stabbing at the throttle delivered a nice, peppy response from the engine which will be great for trail rides.  Thankfully the throttle is also easy to control which is important in tight trails, or when using the X4 on work duty.

With versatility as one of their goals, the X4 also had to be able to handle different jobs.  While the X4 does have a non-tilting rear cargo bed, with the seats forward it is decent sized and will easily tote a couple sleeping bags, your tent, and a cooler, but with passengers in the rear that size is quickly reduced.  No worries.  The 2” receiver hitch is there to help you out.  For big, bulky material like landscape bark, bales, or firewood that will mean towing a trailer.

We didn’t actually tow a trailer through the woods when trying out the Wolverine X4 but you probably could.  It darts between trees very well.  We also really like both the steering ratio, and the assist from the Electronic Power Steering on the X4.  It’s easy to drive this machine all day with no arm fatigue, and even when hitting small water dams and crossings at a good clip we never managed to bottom the suspension.  Once again, it was easily doing everything we had asked of it.

ACCESSORIES from the FACTORY

Every machine starts out with design goals.  Not all reach them.  When building the new Wolverine X4 Yamaha really did a great job of paying attention to all the details.  It performs not only as intended but in many ways far above expectations.  It’s comfortable for the crew, quiet on the trail, it delivers good power and a smooth ride regardless of the terrain, and it can be transformed into a working tool when you need one.  The Wolverine X4 is a great example of excellence in design.  Goals met! 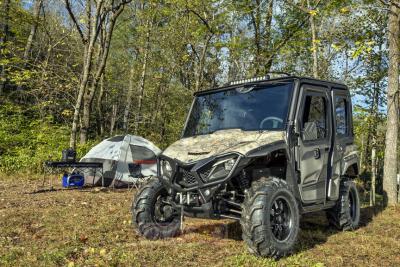 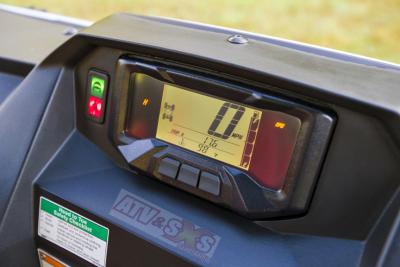 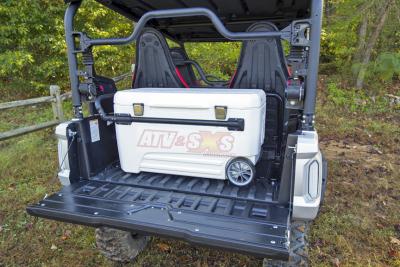 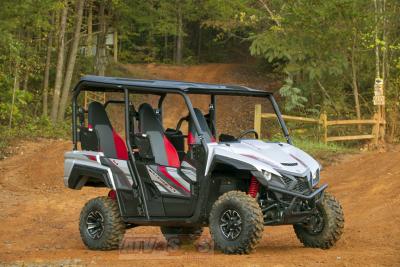