HORSEPOWER, FEATURES, and PRICE OF THE CFORCE ATVS!
Written By:
John Arens 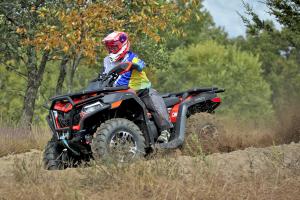 YOU’VE HEARD OF CFMOTO.   YOU MAY HAVE EVEN TRIED ONE, BUT EITHER WAY, THEIR ATV LINEUP IS EVOLVING AND BEING REFINED, WITH MORE FEATURES, MORE POWER, AND MORE VALUE.   IT’S TIME TO TAKE A CLOSER LOOK BECAUSE CFMOTO IS THE REAL DEAL, AND THEY’RE HERE TO STAY. 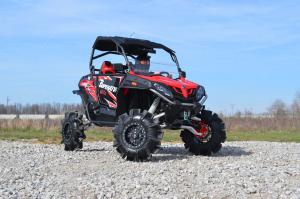 Plymouth, Minn. June 10, 2016 – Built for Battle…those were the bold words emblazoned down the side panel doors of the menacing ATV proudly on display during the annual Mud Nationals in Jacksonville, Texas this past spring. Exhibiting both capability and class, the mud ready custom vehicle was a collaborative effort between SuperATV and CFMOTO U.S.A. and it’s safe to say it was a showstopper.The high-performance CFMOTO Z-FORCE 800 EX with Electronic Power Steering (EPS) is a formidable side-by-side in it’s own right. Powered by a burly twin-cylinder 800cc engine featuring electronic fuel injection and a potent 62-horsepower; the top of the line ZFORCE model has already turned plenty of heads within the off-road community with its unbeatable combination of performance, premium features and unbeatable value.From there, the crew at SuperATV took over and transformed the ZFORCE into a battle ready mud machine, outfitting it with a long list of some their most coveted performance accessories including legendary High Clearance A-Arms, Portal Gear Lift, and Nerf Bars; while also including luxury add-ons such as Bluetooth® capable stereo system and water resistant cargo box.