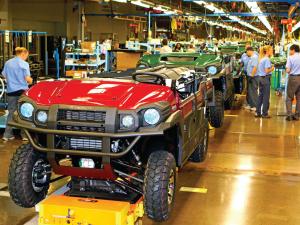 There aren’t many buildings on the planet to rival Kawasaki Motor Manufacturing’s rail car production plant on the gently rolling plains outside Lincoln, Nebraska. At over 1600’ long, it’s positively enormous, Then again, Kawasaki is used to building things on a big scale and besides rail cars, motorcycles, construction equipment, helicopters, and a long list of other products, they also build supertankers that would barely fit inside the cavernous structure. 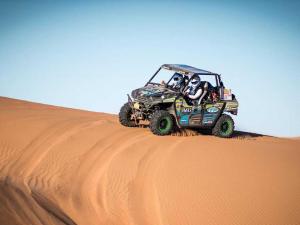 Irvine, Calif. (April 9, 2015) – Kawasaki IMG Motorsports drivers Sara Price and Erica Sacks accepted one of the toughest challenges in all of motorsport when they entered the 2015 Rallye Aïcha des Gazelles. Dubbed the #TeryxGirls, Price and Sachs signed up to navigate through Northern Africa in their Kawasaki Teryx® while plotting their course on maps from the 1960's. The #TeryxGirls were one of 158 teams competing from 13 different countries and are the first U.S. based team to compete in the Quad/Moto/SSV class at the rally. After a roller coaster trip though the desert, the #TeryxGirls finished seventh in their debut and collected the prize for highest finishing first time competitors in their class . 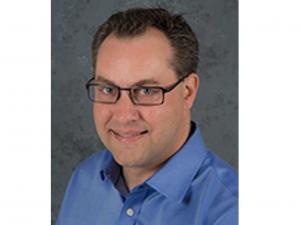 Kawasaki Motors Corp., U.S.A. (KMC) is pleased to announce the promotion of Chris Brull to Vice President of Marketing effective April 1. Chris has spent 25 years delivering innovative marketing solutions on both the agency (DMB&B, Foote, Cone & Belding) and client side. His career at Kawasaki began in 2004 as the National Marketing Manager, before taking the helm as Director of Marketing in 2009. During his tenure Chris engineered a strategic transformation of KMC's marketing direction to focus on consumer-centric marketing. This direction includes an emphasis on innovation, leading KMC to establish many industry firsts including unique experiential events and digital marketing tools. Under Brull, Kawasaki became the first Japanese powersports OEM to launch mobile-based communications and a first-mover in social media. More prominently, KMC was the first to stage a new product launch simultaneously broadcast around the world from Times Square in New York City. 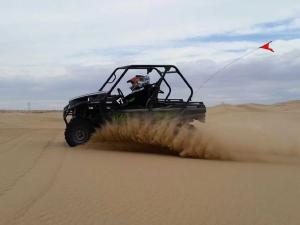 Lake Elsinore, Calif. (March 3rd, 2015) – Team Kawasaki IMG Motorsports is just weeks away from their debut in the 25th Annual Rallye Aïcha des Gazelles in Morocco Africa, an all female race that doesn’t reward speed, rather a team’s skill at navigating the shortest distance point to point (without the aid of GPS). Team Kawasaki IMG Motorsports will be challenged with plotting their route using only maps, a plotter and a compass on an unmarked course that can take longer than Sunrise to Sunset to reach the goal checkpoints in the day. Each morning they will receive their Map along with a Coordinate or Distance and Heading to checkpoint 1 and once there they will recieve a “Road Book” containing geographic coordinates and or headings and distance of the day’s checkpoints and last checkpoint of the day being their Bivouac where they do all they can to recover and prepare for the next day.  The course is completely off-road and redesigned each year, making this rally not just physically exhausting but also mentally taxing.

IRVINE, Calif. (Feb. 18, 2015) – Kawasaki Heavy Industries, Ltd. (KHI), the global parent company of Kawasaki Motors Corp., U.S.A. (KMC), has announced several changes to its executive management. The Motorcycle and Engine Company’s current President, Mr. Shigehiko “Scott” Kiyama will be succeeded by Mr. Kenji Tomida, effective April 1, 2015. Mr. Kiyama spent many years working at KMC’s Irvine headquarters where he arrived in 2002 to oversee Kawasaki's planning, vehicle inventory and production management in the United States. He was assigned the duty as KMC’s President at the start of 2006, where he remained until his return to Japan in 2009. Since July of 2013, the incoming president Mr. Kenji Tomida served as Senior Vice President and Executive Officer at KHI as well as General Manager of the Corporate Planning Division.  His tenure with Kawasaki includes a seven-year period during the late 1980s where he worked in the finance department at KMC’s Irvine headquarters. KHI also confirms that Mr. Hiroshi Takata, a former President of the Motorcycle & Engine Company, will retire from his current position and remain as a Director of KHI, effective April 1, 2015.

For 2015, Kawasaki introduced an all-new workhorse to the popular utility Side X Side category – MULE PRO-FXT. And now Farm Industry News has recognized Kawasaki for having the top Side X Side in the utility category with a prestigious FINOvation award.Farm Industry News cited the new engine, chassis, innovative Trans Cab™ transformable cab feature, and interior amenities as key innovations that push the 2015 Kawasaki MULE PRO-FXT to the top of the utility Side X Side category.

ATV.com honors Kawasaki’s newest addition to its Side x Side line-up

For 2015, Kawasaki introduced an all-new workhorse in the popular utility Side X Side category – MULE PRO-FXT, and ATV.com has recognized it as the top Side X Side in the utility category with its prestigious “Utility UTV Of The Year” award. ATV.com cited the innovative Trans Cab™ transformable cab feature, new drivetrain, impressive towing and hauling capacities, along with its interior amenities as key innovations that push the 2015 Kawasaki MULE PRO-FXT to the top of the utility Side X Side category.

Co-pilots Sara Price and Erica Sacks will take on grueling 9-day race in the deserts of Morocco, Africa 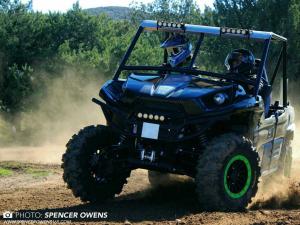 Lake Elsinore, Calif. (January 8, 2014) – Team Kawasaki IMG Motorsports announced today that they will support the first ever ‘American Side X Side Team’ to race in the 2015, 25th Anniversary, Rallye Aïcha des Gazelles.  Sara Price and Erica Sacks will be tackling one of the toughest All-Female Sporting events on the planet in a factory supported Kawasaki Teryx® Side X Side built by IMG Motorsports. The Rallye Aïcha des Gazelles is a 9-day race located in Morocco, Africa where approximately 160 teams and 300 competitors come together to tackle the terrain without the help of GPS. Using nothing but outdated maps, teams are forced to navigate through the incredibly tough terrain with nothing but a compass and their will to succeed. This navigational challenge will be a true test for the Kawasaki IMG Motorsports team. They will navigate with the goal of traveling the shortest distance from Point A to Point B, ranging anywhere from 700 miles to 3,000 miles. 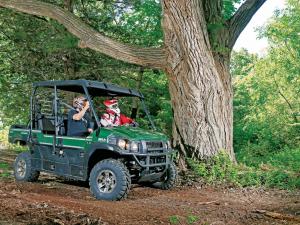 This is not your father’s Mule.  Forget all you know about the strictly utilitarian vehicle that found its way to every parks department, campus, and major work site in the country.  The previous Mule has about as much in common with the all-new Kawasaki Pro FXT Mule as the long eared version does with the Kentucky Derby winner.  Consider the new PRO FXT Mule the King of all Mules.

IRVINE, Calif. (August 11, 2014) – Kawasaki Motors Corp., U.S.A. (KMC) establishes itself as the latest OEM to join the growing list of exhibitors showcasing new products at the 2014 American International Motorcycle Expo (AIMExpo). The groundbreaking event returns to the Orange County Convention Center in Orlando, Florida, this October 16-19.  Kawasaki has chosen the all-in-one platform AIMExpo provides to announce key 2015 products, one of which will make its world debut in Orlando. Attendees will also be able to witness the North American introduction of all-new vehicles in several categories that demonstrate the heritage and dynamic capabilities of Kawasaki Heavy Industries.  “AIMExpo demonstrated last year that it can serve as the ideal platform for media and brand activities and Kawasaki will leverage this grand stage to reveal new products, as well as interact closely with dealers and consumers,” explained Kevin Allen, Kawasaki Manager, PR + Brand Experience. “We have some very exciting new product to share and AIMExpo is the perfect place to make these announcements."