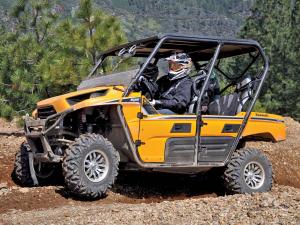 Kawasaki and top bull rider J.B. Mauney team up for giveaway through the PBR

IRVINE, Calif. (January 5, 2013) – Kawasaki Motors Corp., U.S.A. (KMC), the official Side x Side and ATV sponsor of the Professional Bull Riders (PBR) Built Ford Tough Series (BFTS), will be providing fans with an opportunity to win an Off-Road Rated Kawasaki Teryx4™ Side x Side just like the one owned by superstar bull-rider, J.B. Mauney.This year Kawasaki and J.B. Mauney have teamed up in a sweepstakes where Kawasaki will be handing over a set of keys to a bright white Kawasaki Teryx4 750 4x4 EPS to one lucky PBR fan. While PBR bulls may have impressive strength and agility, Mauney’s Teryx4 allows him to bring three friends along for adventures that last a whole lot longer than eight seconds! 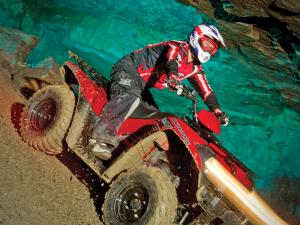 The old saying is, “It’s not the size of the dog in the fight, but the fight in the dog.”  The best example of that in the ATV World is the Kawasaki Brute Force 300.  While less than half the displacement of its bigger brothers in the Kawasaki lineup, it’s a huge overachiever on the trail. 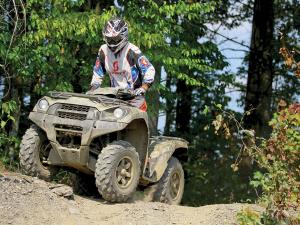 The State of West Virginia is a wonderland of natural beauty.  Venture off the interstate in any direction and you will quickly find yourself immersed in rolling hills and the mountains of Appalachia.  West Virginia is also blessed with abundant natural resources, most notably coal, and state and local officials have welcomed others to enjoy the beauty of their mountains with the creation of the Hatfield-McCoy Trail System, the preeminent off-road trail system in the country.

IRVINE, Calif. (Aug XX, 2012)---Kawasaki Motors Corp., U.S.A. (KMC), the "Official ATV and Side x Side" sponsor of the Professional Bull Riders (PBR) Built Ford Tough Series (BFTS), will be providing fans with an opportunity to win one of three rugged Kawasaki off-road vehicles! Kawasaki has announced a Win-My-Ride promotion that features the give-away of a Kawasaki Mule™ side x side and two Brute Force® all terrain vehicles.  The three winners will be selected at random and announced after the PBR Built Ford Tough Series World Finals in November, 2012.

Kawasaki's Off Road Adventure Anyone Can Do
Written By:
John Arens 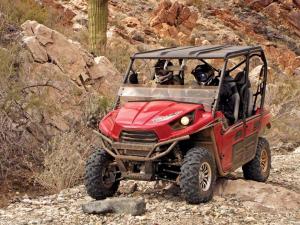 Every ATV & Side x Side rider has a little bit of explorer blood coursing through their veins.  A century or two ago, the riders of today would have no doubt been the ones to turn their horse West and venture out into unknown territory as the fur trappers, mountain men, scouts, and pioneers of the time.  It would have been the chance to live on one’s own terms, to explore mountains, prairie, rivers and plains, and with a little luck, to possibly even strike the mother lode.

What We Learned from a Year on the Trail 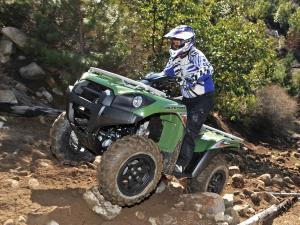 It’s our job to let you know exactly what to expect from every vehicle we test.  We want you to know what a machine is capable of long before you hand the dealer a check, and that means everything from fit and finish to average maintenance tasks.  We use our test ATVs exactly like you do; for work duty, for weekend play, and as hunting buddies.  After a year with the Kawasaki Brute Force 750 4x4i here is what we’ve found. 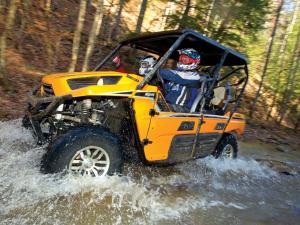 The Green Team has been on a roll. In the past year, Kawasaki has introduced all-new Brute Force 300 and Brute Force 750 ATV’s, and at their dealer show, they previewed the new Teryx4 750 4x4 Side x Side. That was only a teaser and we weren't allowed to ride the new Kawasaki at their Florida dealer meeting. So when Kawasaki’s Jon Rall called asking if we would like to come to Tennessee’s Brimstone Recreation to try the new Teryx4 750, we grabbed our gear and were on our way. 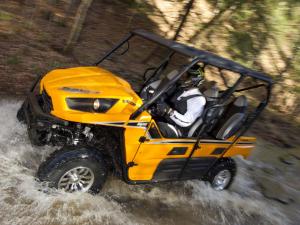 Irvine, Calif., April 11, 2012 – Off-Road racing champion Destry Abbott and his family will be taking one lucky family on an Ultimate Family Adventure through the mountains of Southern California in Kawasaki’s newest side x side, the Teryx4.“The off-road rated Kawasaki Teryx4 is a great vehicle for the whole family.” said Kawasaki Marketing Communications Director Chris Brull. “With four seats, a family can go out on the trails, explore and enjoy everything the Teryx4 has to offer. The Ultimate Family Adventure will be an amazing experience for the winners as they explore Southern California with Abbott.”

Let's Get Ready to MOTO!
Written By:
Pete Bengel 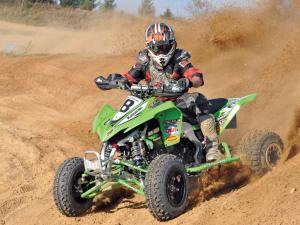 If you read our coverage of the stock 2011 KFX450R, you probably know that we think quite highly of the Kawasaki. It doesn’t boast show-stopper numbers as far as horsepower or suspension travel, but its great feel, performance, and overall fun factor earned it great reviews from our test riders. It was a natural on the XC course, and we even put in some surprising finishes on the MX track in bone-stock form against many highly modified 450 sport quads.