UV protected & water repellentFully trailerable designHeavy Duty Marine Grade VinylFront zipper mount to prevent fabric from flappingRadius design for a sleek lookVariety of colors available to match your vehicleInstalls in minutes no tools needed Keep you and your passenger out on the trail all day long. Pro Armor Sport Roofs protect you and your rider from the elements so you can enjoy your adventure. Our heavy duty, marine grade vinyl is UV protected and water repellent.  This is the same material we use to produce our suspension seats.  Roofs are made from black carbon fiber and you have a variety of color choices to match your vehicle (red, orange & white).

Camp RZR is Headed to the United Arab Emirates

Polaris RZR is thrilled to be going to the United Arab Emirates (UAE) to celebrate the global love of off-roading at Camp RZR U.A.E.  The UAE is home to some of the world’s best dunes and most passionate off-roaders- it’s the perfect place to hold the first Camp RZR outside of North America. Date: March 28-29, 2014 RZR is bringing its top engineers, Jagged X race team, and XP1K star RJ Anderson to meet and ride with the people of the UAE.  Camp RZR 2014 will feature rides, show & shine, Engineering displays, food, music, and more- just like the Camp RZRs held in Glamis, Calif. For those that want to follow the Camp RZR UAE activities, follow us on social media:

Minneapolis, February 20, 2014– Polaris Industries Inc. (NYSE: PII) today announced the company’s TerrainArmor™ Non-Pneumatic Tire (NPT) was a finalist for Tire Technology of the Year by Tire Technology International. “Polaris would like to thank Tire Technology International for recognizing TerrainArmor tires as part of their short list for Technology of the Year,’” said Rich Haddad, general manager of Polaris Defense. “Polaris is the first manufacturer to bring NPT technology to the off-road consumer and defense markets, and we feel the technology will make a great impact on the future of our industry.” 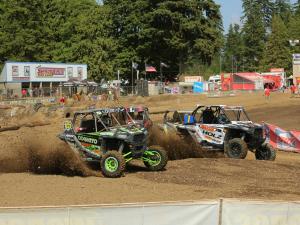 Minneapolis, Feb. 11, 2014-WORCS Round 2 saw more than 80 UTVs line up at Buffalo Bills, in Primm, Nevada, and Polaris Factory Racers Beau Baron and RJ Anderson would go one/two in the Pro Class. Polaris Racing/Holz Racing’s Beau Baron would start in the second row and steer his RZR XP 1000 to the win for his first win of the season. Second would go to RJ Anderson, who kicked off the WORCS season with a win at Taft, in his Loan Mart/Holz/Walker Evans RZR XP 1000. Jeff Obering, also racing a RZR XP 1000, would take third. The SxS 1000 class also would see RZRs dominate the podium with David Haagsma taking his second win of the season, Matt Hancock taking second and Mike Gardner in third. The next WORCS race is Lake Havasu, Arizona, March 14-16.

Minneapolis, Feb 10, 2014–The King of the Hammers (KOH) is known as the toughest off-road race in the world, and last year’s 115-mile course was known as the most-difficult course ever. So much so that Race Organizer, Dave Cole, kept the same course that only three UTVs, all being RZRs, finished last year. Polaris Factory Racers Mitch Guthrie and his co-driver Mitch Guthrie Jr., who has won four KOH races and took second once, would line up in their Magnum Off-Road Racing RZR XP 1000, and Jon Crowley and Blake Van de Loo, in their Jagged X-supported RZR XP 1000. When the dust settled, Guthrie would take his fifth King of the Hammers Pro Class win proving nobody beats “The King.”

“They’re shooting behind the duck.”  That was a quote heard at our first ride on the Polaris RZR XP 1000 EPS about how other OEMS often find themselves trying to catch up to the relentless, breakneck pace Polaris has set with new model development.  Sometimes there are just too many ducks to follow.

Sportsman® ACE is Confidence-Inspiring and Fun to Ride

Minneapolis, January 22, 2014- Polaris® Industries Inc. (NYSE: PII), the leading manufacturer of off-road vehicles, today announced the company is defining an entirely-new type of off-road vehicle with the introduction of the Sportsman® ACE. The vehicle’s architecture is completely new to the industry and features a revolutionary, sit-in chassis that is nimble and comfortable to operate. The design of the new Sportsman ACE provides a confidence-inspired ride, all while being trail-capable, offering an all-new off-road experience.