Minneapolis, Nov. 20, 2013-The Baja 1000 is a true test of a machine and driver and Polaris sent three race teams to the line to conquer the epic race.  It would be a true test of the RZRs ability and durability, and, in the end, Coastal Racing, Jagged X and Cognito Racing would be three of the five in the UTV Pro Class to finish the grueling race. Coastal Racing would take on their first-ever Baja 1000 with drivers Scott Kiger, Mark Holz and RJ Anderson; and co-drivers Rob Utendorfer, Tyler King and Brian McLean. The Coastal Racing No. 1932 RZR would be the first in the UTV Pro Class to cross the finish line. The race would take Coastal Racing 27 hours and almost 17 minutes to complete.

MINNEAPOLIS (November 12, 2013) — Polaris Industries Inc. (NYSE: PII) today announced that it has purchased all of Fuji Heavy Industries Ltd.’s (“FHI”) 3.96 million shares of Polaris’ common stock for a purchase price of $497.5 million, thereby reducing its outstanding share count by approximately six percent.  Polaris funded this purchase with a combination of cash on hand and $250 million of borrowings under the Company’s revolving credit facility.  Polaris and FHI have a long successful engine supplier relationship dating back to 1968, when FHI began manufacturing Polaris’ exclusive “Star” engine.  FHI was the sole manufacturer of Polaris’ engines from 1968 to 1995, at which time Polaris gradually began to produce its own engines for select models.  For model year 2013, FHI supplied approximately one-fourth of Polaris’ engines used in a number of models of snowmobiles and off-road vehicles.  For model year 2014 and beyond, the Company anticipates that the percentage of FHI-supplied engines will decline further as Polaris continues to significantly expand its own engine portfolio.

Minneapolis, November 5, 2013- Polaris Factory Racer Ryan Piplic was a man on a mission at the second annual Fuel Fest, in St. George, Utah. His mission: to break RJ Anderson’s World Record Side-by-Side Jump of 129.75 ft.Anderson set the jump record during the filming of the XP1K video filmed at an abandoned iron mine complex in California. Piplic would try to best it at the SGMX Motoproving Ground after he took the Ultimate UTV Challenge win in his RZR 900 earlier that day. To break the record, Piplic hit the ramp at more than 75 mph and accomplished the feat on his second jump of the night, sailing his FOX RZR XP 1000 155.8 feet.

Minneapolis, October 30, 2013 – William Yokley and his Coastal / Polaris / CST / Yoshimura /Yokley Racing Holz-built RZR 900 took the GNCC “XC1 Modified” UTV Championship for fifth consecutive year with Yokley’s teammate, Scott Kiger finishing the season in fourth. RZRs proved to be a dominant force in the class taking the top five spots for the season, including Yokley’s nephew, John Yokley, taking second in his Big Country Powersports/Yokley RacingRZR 900. Yokley finished out the season at the Ironman with a fifth in the “XC1 Modified” class and fifth overall, after breaking a rear axle, but had enough series points to seal the championship. Kiger also had mechanical issues and had to be conservative with speed and finished in fourteenth. 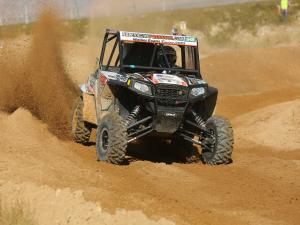 Minneapolis, October 17, 2013 – From Coast-to-Coast, Polaris RZR was out in full force this past weekend. From GNCC to BITD, Polaris Factory Racing Teams were on top of the podium and securing championship wins. In WORCS, it would come down to the last race of the season, Buffalo Bills, to decide the Pro Production class winner. Polaris Racers Beau Baron and Ryan Piplic, in their RZR 900s, would duke it out for the championship. When the dust settled, Baron would edge defending champion Piplic for the win to take the championship. In Production 1000, Mitch Guthrie Jr. would take a second place, in his Guthrie Racing/HRPRZR 900, to seal the class points for the season. Cody Rahders, in his RZR 570, would finish third this year in Production 700.

2013 Polaris Introduces Another RZR® Beyond Compare 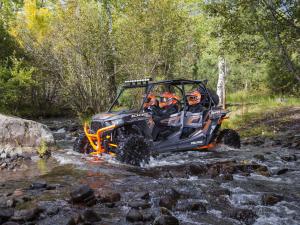 Minneapolis, October 15, 2013 – Three months ago, Polaris introduced the RZR® XP 1000, which brought incredible innovations to each of the hallmark Power, Suspension and Agility aspects of RZR®, and added an entirely new level of interior comfort and accessory customization. In true Polaris fashion of aggressively bringing vehicles to market that suit the needs of all off-road enthusiasts, the company is introducing the all-new RZR® XP 4 1000, which offers the ultimate RZR experience for four. “RZR has defined the recreational side-by-side market, outselling the competition five to one, and owning a RZR has become a lifestyle allowing for social adventure,” said Craig Scanlon, general manager for the Off-Road Vehicle Division at Polaris. “Our four-seat RZRs provide off-road enthusiasts the ability to share that lifestyle with more of their family and friends, and the new RZR XP 4 1000 is the ultimate in outdoor adventure for four.”

Minneapolis, October 10, 2013 – Polaris® Industries Inc. (NYSE: PII), the leading manufacturer of off-road vehicles, today announced the company is the presenting sponsor of RFD-TV’s THE AMERICAN, which is set to be the largest and richest one-day rodeo in western sports history, with a payout of $2 million. “THE AMERICAN offers us a unique opportunity to support the western lifestyle, which we know a lot of our RANGER customers are a part of,” said Beth Shimanski, marketing manager for Polaris RANGER. “We are excited to be part of what will be a defining day for the best rodeo athletes in the world.”

Camp RZR is back! Join us in Glamis, California to celebrate. This will be the biggest party in dunes to say “thank you” to all RZR owners who have helped RZR become what it is today. There will be activities for all ages. We’ll kick everything off with Halloween night trick-or-treat and close the weekend out with a big bang by giving away a RZR XP 1000 and hosting the best fireworks show Glamis has ever seen. We hope to see you there!Join Us For:Demo the new RZR XP 1000Giveaways every dayKids ZoneSee XP1K and Meet RJ AndersonShow & Shine CompetitionFree Food